Libya Defense Minister to Be Replaced after Capital Hit by Fighting 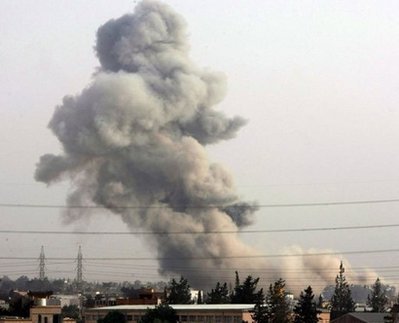 Libya's Defense Minister Mohammed al-Barghathi is to be replaced, Prime Minister Ali Zeidan said on Thursday, the day after deadly clashes between armed groups in Tripoli.

"The defense minister will be thanked and we are going to name a new minister," Zeidan said in a speech.

He noted that Barghathi had already put forward his resignation at the beginning of May before withdrawing it shortly afterwards at the government's request.

On ground, tension was palpable in the Libyan capital on Thursday, a day after deadly fighting broke out between groups of ex-rebels, highlighting the country's continuing insecurity nearly two years after dictator Moammar Gadhafi fell.

Much of Libya's recent unrest has centered on the eastern city of Benghazi, the cradle of the 2011 uprising against Gadhafi, where attacks blamed on Islamists have targeted both the authorities and Western interests.

But it now seems to be spreading to Tripoli, where brigades of ex-rebels remain entrenched despite government efforts to disarm them and impose its authority.

Since the fall of Gadhafi's regime, militia groups, mostly ex-rebels, have managed border controls, prisons, strategic facilities in the country and vital institutions.

Coming from different parts of the country, representing different tribes and with varying ideologies, they have received salaries and perks from the authorities, and some have even benefited from smuggling and extortion.

Deadly events on Tuesday and Wednesday epitomized the sense of lawlessness that surrounds them.

A group of armed men from the city of Zintan who had been guarding oil facilities in the southern desert, attacked the Tripoli headquarters of the petroleum industry security force on Tuesday.

They had been replaced by another group and wanted their jobs back.

Another "brigade" of ex-rebels, loosely attached to interior ministry's high security commission, intervened in the fighting. Five people were killed and five of the Zintanis seized.

On Wednesday, armed Zintanis attacked the Tripoli headquarters of the brigade, located in the capital's Abu Slim district. They ransacked it and freed their comrades.

Five people were also killed in that fighting and another 97 wounded, the health ministry said.

The interim head of Libya's army, General Salem al-Konidi, said "we tried to intervene, but our resources did not allow it".

On Thursday, military police remained deployed at key points along the airport road near Abu Slim, having arrived during the previous days clashes.

While there were no outright threats, there was a sense among people in the city that there could be more inter-militia clashes.

Konidi also disowned the Zintanis, who are officially attached to the defense ministry, saying "forces that don't follow our orders don't belong to us".

The government limited itself to issuing a statement overnight in which it regretted the "deplorable acts" and affirmed its intention to enforce its decision to remove "illegal militias" from the capital.

That decision had been taken by the General National Congress (GNC), the country's highest legislative and political authority, after deadly fighting in Benghazi three weeks ago.

And the government said on Thursday that, during the course of the day, Prime Minister Ali Zeidan would speak about the latest clashes.

But while violence hit Tripoli, there were deadly attacks elsewhere in the country.

Overnight, three car bombs exploded in Sebha, 700 kilometers (434 miles) south of the capital. Two people died and 17 were wounded in the blasts, which came at roughly half-hour intervals, officials said.

And in Benghazi on Wednesday, an army officer died after a bomb placed in his official vehicle exploded.

The death of Lieutenant Colonel Jemaa al-Misrati came a day after gunmen killed six soldiers at a checkpoint south of Sirte, the late Gadhafi's hometown.

In the process, the revolutionaries who were heroes in 2011 are now a thorn in the country's side because they do not hesitate to resort to violence to defend their existence and their interests.

And that extends to turning their sights on the authorities whenever they attempt to turn off the tap.

A large part of the population rejects the permissiveness of the authorities and their alliance with militias.

As the latest violence unfolds, the GNC elected a new head, Nuri Bousahmein, to replace Mohammed Megaryef, who stepped down after a law was passed banning from politics officials of the former regime.

Ironically, while having served as Libyan ambassador to India in the 1980s, Megaryef defected from the regime and became a leader of the exiled opposition for three decades.

Bousahmein will be tasked with leading the country toward new general elections, based on a new constitution that will spell out what political model the country is to follow.