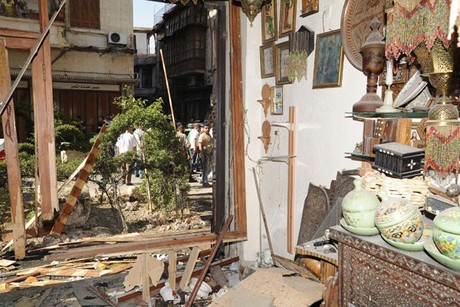 Speaker Nabih Berri on Thursday telephoned Greek Orthodox Patriarch of Antioch and All the East Yohanna X Yazigi to inquire about his health, after a suicide bomber blew himself up near the Mariamite church in the Damascus Christian neighborhood of Bab Touma.

Meanwhile, Lebanese Democratic Party leader MP Talal Arslan condemned the bombing, saying “the continuous attack on Syria is part of the same plot that is aimed at undermining the Syrian society's unity through the detestable sectarian divisions that are threatening the unity of our Arab society.”

“This suspicious plot – which failed to achieve its objectives in Syria in the face of the unity of the state and the components of the Syrian people -- will only boost our resolve to confront it at all levels, whether in Lebanon or anywhere else,” Arslan added.

He warned that “this bombing that targeted a Christian neighborhood in Damascus highlights the intentions of the malicious scheme that is aimed at displacing Christians from the region in order to weaken and end their pioneering role in the Levant.”

But the head of the Balamand Monastery, Bishop Ghattas Hazim, denied to Voice of Lebanon radio (93.3) that the patriarch was the target of the suicide attack.

The Syrian Observatory for Human Rights confirmed the toll, adding that the likely target of the bombing was a Shiite Muslim charity located in the Christian neighborhood.

At least two shops were damaged by the blast, Agence France Presse said.

On October 12, thirteen people were killed in an attack in front of a police station in Bab Touma.

Very very sad news.... The sooner Bachar is gone, the better for the entire middle east.

Al Nusra will disintegrate like they did in Mali, I have no doubt about it.

Désinformation!!!!!! Let me tell you something because you seem to be young.

Who brought the black ninjas to Lebanon first?

It was in the 80s..... And beleive me, they brought their fashion from Tehran, not Mecca.

Now, one must be honest with himself, Iranian girls are pretty and many wear transparentish veils and barely cover their hairs, thats the workaround for this backward law.

But in the end, it's the Shia who brought this ugly dress code to our once beautiful country. The Saudis are copycats.

Did they mistakenly behead the 3 Christians including the bishop for a shiite or allawite?

talk to him respectfully. STFU is an insult. Behave for God's sake.