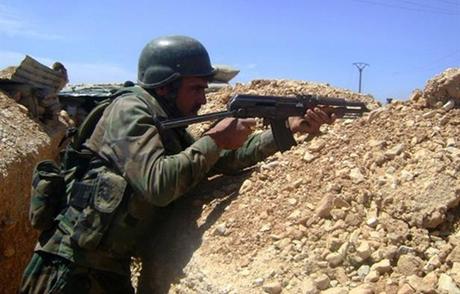 Syrian regime forces stormed a town in the central province of Homs on Thursday after days of fierce clashes with rebels, a monitoring group said.

State television said the army had "restored peace and security" to Al-Qariatayn.

"Now the army is searching the town and detaining people," he said.

The army has been pressing an assault on villages surrounding Homs city, dubbed "the capital of the revolution" by anti-regime activists.

Regime forces have besieged rebel-held districts in Homs city for more than a year, shelling them daily.

President Bashar Assad's troops seized the former rebel stronghold of Qusayr in the province earlier this month, supported by fighters from Hizbullah.

North of Homs city, the army has intensified its bombardment of rebel-held Rastan and Talbisseh.

On Thursday, the army renewed shelling the town of Houla, scene of a massacre last year, according to the Local Coordination Committees, a network of activists.

To the east, rebels maintain a presence in a handful of areas, among them Palmyra in the eastern desert.

"The army wants to secure a kind of moral victory by crushing Homs," Abdel Rahman said.

"Areas east of Homs city are important because they lie near Damascus province," he told Agence France Presse.

Activists in and near Damascus have reported daily bombing of rebel areas, and a major assault that has lasted more than a week against the Qaboon and Barzeh districts in the north and east of the capital.

Meanwhile, the army has captured parts of Barzeh, the Observatory said.

Towns near Damascus held for months by opposition forces for months, such as Harasta, Zamalka and Douma, have been coming under intense fire, said the Observatory.

Clashes also raged in Rashidin district in the northern city of Aleppo, the Observatory said, days after a rebel attack aimed at taking regime-controlled areas of the city.

Syria's war has killed more than 100,000 people, the Observatory estimates.

The next battle should be fought in Damascus itself... They should bring war and destruction to the heart of the city where the dictator is hiding...

Ask your mom to change your pajama :)

That was actually funny +1 from me. What time is it in Australia now?

Very soon my friend very soon... I will be popping the champagne... Bachar will be hung upside-down in the middle of Damascus square... Mosilini style ending in WWII.

Zahle, Ask your mom to change your pajama :)

Your mom just changed it for me. Ask her she will tell you...

the_roar your boyfriend sajad brought the moom first. Can't you see it?

even if Assad wins who's going to build the country, where's the money going to come from? Syria will become weak and divided just like Iraq unfortunately

Aha! U hit the nail right on the head... Where will they get the money to rebuild?? Y Saudi Qatar n America of course :) a renovation of their new property u can say.

But hey, all the Syrians will finally leave to work in Syria.

Hey Syrian army (josh) u should prolly get some rest, ur posting at 1am. Fighting the good fight on the Internet, a true hero.

A weird thing I noticed... It said the army is shelling houla, where that massacre happened. So I'm assuming it means the army couldn't hold houla, and the ppl there are with the rebels. Evidence the army committed the massacre?

if its true "Respect"!