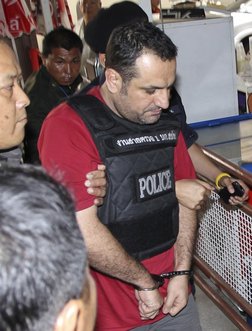 A Swedish-Lebanese man denied on Tuesday links to Hizbullah during his trial on charges of breaking Thailand's weapons laws.

Atris Hussein, 48, was arrested in Bangkok in January last year and police later found chemicals that can be used to make a bomb at an address he rented.

According to the charges, Hussein and some unidentified accomplices had packed more than six tons of ammonium nitrate into bags.

In March, Thai authorities alleged Atris had connections to Hizbullah.

Giving testimony for the first time Atris -- who was handed Swedish citizenship after claiming asylum -- denied the charges.

"I know Hizbullah in general," he told a court.

"But I don't have any relation -- either directly or indirectly -- with the group," he said, adding the movement is widely known in Lebanon and is part of the government.

Ammonium nitrate is commonly used in agriculture, but mixed with other substances can make a bomb. Its possession requires a permit in Thailand.

Prior to his arrest, the United States had warned of a "serious" threat of a terrorist attack on tourist areas in Bangkok.

Two Iranians are currently on trial for suspected involvement in a botched bomb plot against Israeli diplomats in Bangkok in February 2012.

The US spies information through the NSA, issues a warning, a smuggler gets caught with illegal fertilizer and it is blamed on Hezbollah ... very convenient ...

deny, deny and then deny....
how blind can one be?

The man is accused, not yet convicted.. innocent until proven guilty?? so shut yo all up, for now at least. and what is this shia sunni garbage`?? one can refer to hizbullah without saying Shia in a derogatory fashion? Naharnet SHOULD not publish posts that incite bigotry and sectarianism.

I am sure that there is a perfectly good explanation why this honorable Mr Hussain had stacked away a few tons of ammonium nitrate. Perhaps he ran some agricultural business, like norwegian Alexander Behring Breivik did..

Not in Lebanon they allow the terroristas to roam round freely. Even in Buddhist and pro katoy Thailand they deal with them accordingly.

Its all a conspiracy, don`t you see? The US, Israel, Bulgaria, Cyprus, Thailand, Azarbadjan, Egypt, Nigeria, Argentina, Mexico, India, Georgia, Turkey, STL....they are all in on it...surely...

si, the hebews are behind this.... did u not know that thailand and azerbaijan or India were controled by israel and pro zionist america?

hizbushaitan supporters are so blind that they remind me of Germans during the 2nd world war: they believed every single word Hitler used to say.
same here: they believe every single word their Iranian turbaned man says.
they are terrorists, murderers, thieves, drug dealers, ... and by the way: they have been convicted in many cases.

Hitler had the decency of committing suicide..... this nosrallah is too coward to do such a thing. he'd rather hide in sewers like saddam did until he gets caught.

Tha this why the other name for Nasrallah is "the rat". He is nothing but a filthy low life rat... And a murderer of Lebanese politicians...

Sayyid Nasrallah is the most feared man on the planet. Why? Because he is the most truthful and zombies of today despise the truth and the man who speaks it. If it was not for the man of integrity who is fighting the word on daily basis the entire Muslim n Christian faith in the middle east would be speaking hebrew. All citizens of the middles east and gulf should wake up every morning and praise this Great man for allowing them to live freely thus far. Wake Up!