14 Killed in Army Shelling near Damascus 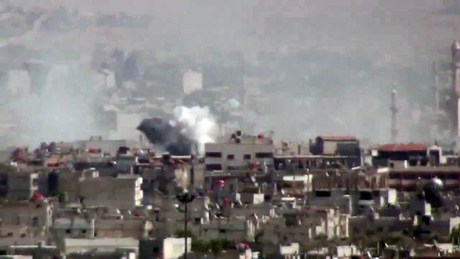 At least 14 people were killed in army shelling on a rebel village near the Syrian capital on Tuesday, as violence raged in flashpoint areas of Damascus and in the central city of Homs, a watchdog said.

The shelling comes a day after a powerful car bomb rocked the district of Kafr Sousa in southwest Damascus.

The blast killed an unknown number of members of the security forces, according to the Syrian Observatory for Human Rights, which said that at least 14 people died in Tuesday's shelling.

"The number of people killed in Kafr Batna has risen to 14, including three women and three children, after regime troops shelled" the village, said the Observatory.

In late spring, the army launched an unprecedentedly fierce onslaught on the area, aimed at cutting off rebel supply lines into Damascus.

The army has meanwhile kept up a bid to crush insurgents already operating in the capital.

On Tuesday, state television said the army has "restored security and stability in most of Jubar" in eastern Damascus.

The district has seen heavy fighting in recent weeks, and according to the Observatory, the army renewed shelling on the neighborhood on Tuesday.

Troops also shelled Qaboon in northeastern Damascus and Barzeh in the north, the group added.

In central Syria, rebels in besieged districts of Homs city held out, four days into an army assault in which Hizbullah is also taking part, said the Observatory.

The army shelled the rebel neighborhood of Khaldiyeh while clashes raged in Bab Hud, the Observatory said, adding that an unknown number of fighters on both sides were wounded.

More than 100,000 people have died in Syria's raging war, which broke out more than 27 months ago when a peaceful movement for change morphed into an insurgency after the army unleashed a brutal crackdown on dissent.

Millions have been displaced as a result of the war, and poverty has ravaged the country.

Since March 2011, Syria's public sector has registered losses of $7.5 billion, according to the country's local administration minister Omar Ghalawanji.

Direct losses due to material damage and other tangible destruction caused by the conflict accounted for $1.25 billion alone, Ghalawanji said.

More than 9,000 public buildings have been "partly or completely destroyed" during the conflict, according to Syria's Committee for Reconstruction, which was established to evaluate war damage and calculate compensation.

Yes move the battle to the heart of Damascus and hang the dictator upside-down... Soon I will be popping the champagne to celebrate justice.