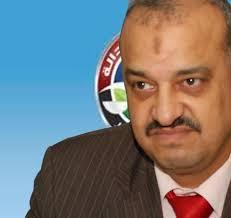 A top Muslim Brotherhood leader urged Egyptians to stand ready to sacrifice their lives to prevent a coup, after the army gave Islamist President Mohamed Morsi and his opponents until Wednesday to resolve their differences or face intervention.

"Seeking martyrdom to prevent this coup is what we can offer to the previous martyrs of the revolution," Mohamed al-Beltagui said in a statement on Tuesday.

He was referring to the more than 800 people killed during the 2011 uprising that ousted veteran strongman Hosni Mubarak.

Seeking martyrdom for what you pice of crap.. If people don't want you then get the hell out.

He should be the first to volunteer.
This is wacky Yacky brainwashing to the illeterate weak individuals who beleive him.....
Unless he is paying their families per head count ?????
Go for it be the first to go to heaven....wherever it is