Belgium's King Albert II Abdicates in Favor of His Son 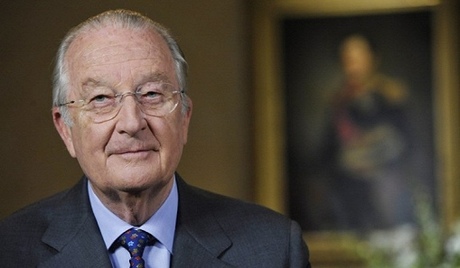 Belgium's King Albert II announced his abdication Wednesday in favor of his son, saying that after two decades at the helm of the tiny country he felt too old and frail to continue.

"I intend to abdicate on July 21," Belgium's national day, the sovereign said in a broadcast to the nation from the royal palace.

"After 29 years of reigning, I believe the time has come to pass the torch to the next generation."

"Prince Philippe is well prepared. He and Princess Mathilde have my entire confidence," Albert said in the short speech, read first in French then in Flemish, Belgium's two main languages.

"I am at an age never attained by predecessors," he added. "My age and my health do not allow me to exercise my duties as I would like."

There had been consistent reports that the sovereign was preparing to abdicate in favor of the 53-year-old crown prince. But many fear that Philippe, whom politicians said would likely be crowned also on July 21, lacks the tact and know-how.

Prime Minister Elio Di Rupo however said that the crown prince "has seriously and with a sense of responsibility prepared himself for his new functions.

"He can count on the government's support," said Di Rupo, flanked by the cabinet and speaking minutes after the announcement.

Last month a 45-year-old sculptor, Delphine Boel, went to court to win official recognition as his natural daughter, not long after a financial scandal that triggered a government decision to force the royal family to pay taxes on its state allowances for the first time.

As the second son of King Leopold III (1901-1983) and Astrid of Sweden (1905-1935), Albert was never destined to reign but was forced to ascend to the throne in 1993 on the death of his older brother King Baudouin, who passed away without an heir.

His decision to step down is the first voluntary abdication in the history of Belgium. The country gained independence from the Netherlands in 1831.

A quiet, self-effacing man, Albert played a key role in the political life of the small language-divided nation, whose affluent Flemish north and more down-at-heels French-speaking south are increasingly split.

In 2010 and 2011, he steered the country's fractious politicians towards a deal after Belgium spent a world record-breaking 541 days without a government.

His negotiating skills through the 18-month crisis, Belgium's bleakest recent moments, were hailed by all bar the powerful Flemish N-VA separatist movement that stands poised to make significant gains in elections next year.

Analysts said the king wanted to give his heir time to make his mark before the potentially dangerous 2014 polls.

"The abdication will enable the future king to take on the mantle and to meet political leaders ahead of the elections. Everyone fears a repeat of the 2010-2011 crisis," said political scientist Caroline Van Wynsberghe of Brussels' ULB University.

As monarch, Albert's duties include representing Belgium at home and abroad on state visits, trade missions, and at high-level international meetings as well as taking an interest in Belgian society, culture and enterprise.

Philippe has been increasingly in the public eye in the last months but some Belgians remained concerned over the departure of Albert II.

"He doesn't seem to have the energy or strength," Nathalie Clicteur, a 47-year-old office worker, told Agence France Presse. But "the king is tired and has earned the right to retire," she said.

Michel Galand, a soldier aged 52, said he was not worried to see Philippe step onto the throne. Though the crown prince seemed "a little awkward" in public he was also "responsible and serious."

Six kings from the house of Saxe-Coburg-Gotha -- now known simply as the royal house of Belgium -- have headed the constitutional monarchy since independence.