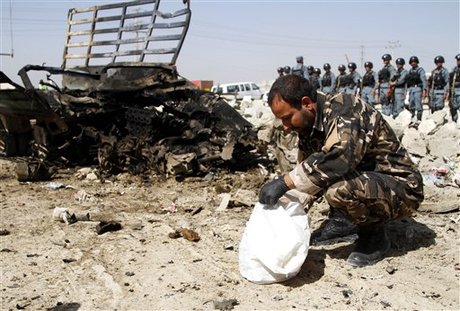 A suicide bomber killed 12 policemen in the southern Afghan province of Uruzgan on Friday when he blew himself up inside a police station as officers ate lunch in a dining hall, officials said.

The bomber targeted a base used to patrol the main road from Uruzgan to neighboring Kandahar province, through one of Afghanistan's most volatile regions where Taliban militants have a strong presence.

"The bomber, who was on foot and wearing a suicide vest, blew himself up while the policemen were having lunch. As a result, 12 policemen were killed and five others wounded," he said.

The attack was the second suicide strike in Afghanistan on Friday after another bomber detonated himself at a border crossing with Pakistan, killing two people including a senior Afghan police commander.

The attacker had crossed from Pakistan to Spin Boldak on the Afghan side, Afghan officials said.

The Chaman crossing is a key route from the Pakistani city of Quetta, which gives its name to the Taliban leadership council, and Kandahar, the insurgency's heartland in southern Afghanistan.

"A suicide bomber wearing a vest of explosives crossed the border into Kandahar's Spin Boldak district this morning and blew himself up, killing two," Javed Faisal, spokesman for the Kandahar governor, told Agence France Presse.

"A top border police commander and a civilian were killed, and eight others, including two border police and civilians were wounded," he added.

Afghan officials say many suicide attackers who strike in Afghanistan are trained in Pakistan, where the Taliban have rear bases and where some its leaders are believed to be based.

Islamabad denies allowing the Afghan Taliban to operate bases in its territory and says it will do everything asked to facilitate Afghan attempts to broker a peace deal to end 12 years of war.

In recent weeks, Taliban insurgents have accelerated their campaign of suicide attacks and roadside bombs against Afghan officials and Afghan and U.S.-led NATO troops.

On Monday, a Taliban suicide attack killed nine people in Kabul including four Nepalese, one Briton and a Romanian.

Around 100,000 NATO troops based in Afghanistan are handing over security responsibility to Afghan forces before the international combat mission ends next year.