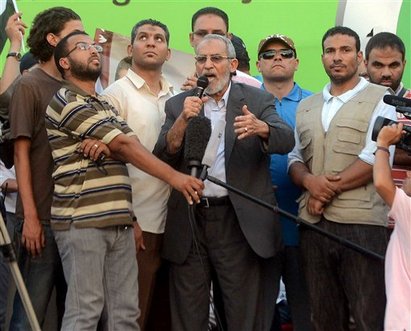 Muslim Brotherhood supreme guide Mohammed Badie told a crowd of supporters of Egypt's ousted president Friday that protesters will remain mobilized until Mohammed Morsi's return after he was deposed by the military.

"Millions will remain in the squares until we carry our elected president, Mohammed Morsi, on our shoulders," Badie told the cheering crowd.

The Brotherhood chief then went on to lead a chant of "Military coup!" and "Invalid!" with thousands of roaring supporters.

Earlier on Friday, the Islamist movement denied media reports that Badie had been arrested by the military.

“I did not run away and rumors in that regard are aimed at misleading the public opinion,” Badie told the crowd outside the Rabaa al-Adawiya mosque, referring to reports claiming he had fled to Libya.

“Morsi is the president of all Egyptians,” he stressed, calling on the army to “return to the Egyptian people.”

“I tell the great army of Egypt that we will protect its back and we ask it to protect us from our enemies. Do not punish the sons of your country, you are more honorable than that,” the supreme guide added.

He said the Brotherhood would discuss “everything” with the army “after our elected president returns.”

“Our peaceful protest is stronger than bullets, tanks and armored vehicles,” Badie emphasized.

“Egypt will witness the end of the military rule … The military coup is illegitimate and there is only one elected president and one elected Shoura Council,” he added.

“Our president is Mohammed Morsi and we will not accept anyone else. We will carry him on our shoulders or we will sacrifice our souls for him,” Badie went on to say.

He called on the army not to protect “only one faction, but rather all the Egyptian people.”

Addressing Grand Imam of al-Azhar Sheikh Ahmed al-Tayyeb, who had backed the army's roadmap that involved Morsi's ouster, Badie said: “You are a symbol but you have no right to speak in the name of Muslims or in the name of Christians.”

Badie also addressed Coptic Christian Pope Tawadros II, another key backer of the military's move, calling on him “not to speak in the name of Copts.”

“You are a symbol but don't speak in their name,” he added, while stressing that “Christians are our partners in this country.”

Badie noted that the referendum over the constitution “was another referendum on Morsi's presidency.”

Addressing the army, Badie said: “Morsi is your commander and you should be loyal to the honor of the institution. We will carry on and we won't be daunted by arrests or gallowses. We tried the military rule and we won't tolerate it another time.”

“Take to all the squares of Egypt to demand the return of our president Mohammed Morsi,” he said, addressing supporters.

Following Badie's remarks, thousands of Brotherhood supporters marched on the state television building, even after three Islamist protesters were shot dead at a Cairo rally.

The Islamists accuse the military of conducting a brazen coup against Morsi, Egypt's first democratically elected president, after millions called for his ouster on the June 30 anniversary of his first turbulent year in power.

The armed forces have already sworn in an interim president, however, and the newly appointed Adly Mansour issued his first decree on Friday, dissolving the Islamist-led parliament and appointing a new intelligence chief.

Morsi, who has not been seen since Wednesday, had issued a defiant call for supporters to protect his elected "legitimacy", in a recorded speech aired hours after his removal.

The military had said it supported the right to peaceful protest, but warned against violence and acts of civil disobedience.

Military police have since rounded up senior members of Morsi's Brotherhood.

Morsi himself was "preventively detained" by the military, a senior officer told Agence France Presse hours after his overthrow, suggesting he might face trial.

Later on Friday, however, the prosecutor general freed two senior leaders of the Brotherhood, the official MENA news agency reported.

It said Saad al-Katatni, who heads the Freedom and Justice Party -- the political arm of the Brotherhood -- and the deputy head of the Islamist movement Rashad Bayoumi were released after two days in detention.

A judicial source said the prosecution would on Monday begin questioning Brotherhood members, including Morsi, for "insulting the judiciary". Thirty-five of them have been banned from travel.

Morsi's rule was marked by accusations he concentrated power in the hands of the Brotherhood. He was also blamed for a spiraling economic crisis.

His supporters argue Morsi was confronted at every turn with a hostile bureaucracy left over by former strongman Hosni Mubarak, overthrown in the country's Arab Spring-inspired uprising of 2011.

OK, good for you. Don't forget to eat, drink and breath religion as such has always been a blessing rendering positive result to civil obligations that otherwise require the careful attention and resolve of qualified and experienced people in the subject matter.

It's tragic, they hijacked the revolution and now they're paying the price.

Both sides are faulty, if the more open minded people wouldn't have boycotted the elections in the first place, none of this would have happened....

Let this be a lesson t the Arab world, especially in Syria when Bachar will be hung and will need to be replaced by a democracy.

...when Bachar WILL be hung... When NostraBenzona? One month into the commotion in Syria in 2011? Or the first Ramadan? Perhaps the second one? How about the upcoming third? Could it be next Wednesday as NostraGabbyMarch14 predicts every week since 2005? How about asking NostraDrArreet7akeh whose latest prediction reveals that PERHAPS in 2013 Bachar MIGHT fall? When NostraDamsels? I cannot wait for this when, analysts extravagants! Keep those wishful predictions coming. Who knows, the luck of the draw might make one materialize. Will be hung alright, I guess. But will have to fall first, no? Whatever. I like it when some take themselves seriously and confirm to us things that cannot be confirmed until they are actually confirmed, if you know what I mean. Bests.

These idiots need to know that democracy does not mean impose the ideology of Islam onto everyone...

Why do they all have the mark of the beast on their foreheads?

There is no democracy in Religion

Supreme Guide? Is he eventually going to be promoted to Supreme Leader? And an Ayatollah? Muslim Brotherhood trying to follow the Iranian path? Glad you got stopped in time.

Supreme Guide Says Brotherhood to Stay on Street until Morsi 'Returns..........................
They borrowed a page from HA book. They better ask for advice on how to do it right. But it will not work for them since the army is the stronger one in their case.

Egypt is the next syria

not the same thing--egypt's army is on the side of people--syria's army doesn't care about the people, just the rulers.