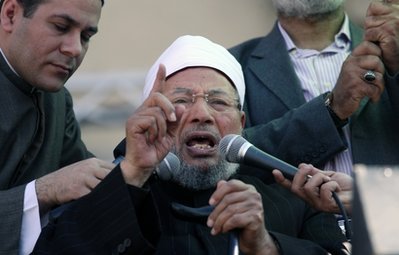 Influential Muslim cleric Yusuf al-Qaradawi on Saturday issued a religious decree, or fatwa, urging Egyptians to support overthrown Islamist president Mohammed Morsi who was toppled by the army on Wednesday.

"Their every action is invalid," Qaradawi said of "those who have overthrown the president, suspended the constitution and imposed another president and constitution" on Egypt.

The Qatar-based but Egypt-born cleric published the fatwa on his Internet site.

He urged "all parties and political groups in Egypt to support correctness and restore President Morsi to his legitimate post".

"Sharia (Islamic law) imposes on all believers allegiance to the elected president, to carry out his orders and conform to his directives."

Morsi "must remain president, and nobody can claim the right to remove him in the name of the people", Qaradawi added.

"I call on all Egyptians, men and women, young and old, rich and poor, Muslim and Christian, liberal and Islamist to join ranks to protect the gains of the revolution" that overthrew Hosni Mubarak in 2011.

Qaradawi, 86, is regular commentator on Al-Jazeera satellite television and has backed the Arab Spring uprisings in Tunisia, Egypt, Libya, and Syria.

Democracy was screwed up in the last year.
Revolution of the youth was hijacked by religion.
Wear the religious robe and practice religion.
Let the politician handle politics.
T he military is to protect the people and the country not a leader or a party.
Religion and politics will never mix.
It creates racism ( Israel and its identity as a example) or isolationism......Hamas is an example.
Get into real democracy

Get a constitution not a fatwa

Enough with fatwas already please! Religious officials should stick to their mosque/church and not dabble in politics. Neither Political Christianiaty was viable in Europe nor is Political Islam viable in the Middle East. Separation of Mosque/Chruch and state is an absolute must if we are to progress in the Arab world. The whole world has put us in their rear view mirrors while we are still doing silly and crazy things like issuing fatwas and counter fatwas.
Enough already, grow up!

Beliefs such as this guy espouses and those of wilayat al vaquero subscribers are but two faces of the same coin. If we are to move forward and prosper, both of theses phenomena must be totally uprooted and discarded.
Alas, the Arab masses have not yet arrived...

@theresistance
Thank you for the kind words. A shining example of why Lebanon should be rid of the likes of you.

How about the Ayatollah? How about Moqtada al Sadr? How about Hassan Nasrallah??? Lol

I respect Qaradawi but am leaning towards what Lebanon first said - whether it be Al Qaradawi or Al Rahi. I am for the consensus of the people and am for the Egyptians to choose and the Syrians as well. My only worry with this all is that it might detract from our united goal to see Syria reclaimed for the people.

Speaking of sheep and fatwa AND Shia... Lets remember what your god ayotllah wrote in his book " vilayat fekeh". It is haram to eat the flesh of a shee after you have intercoarse with it. Instead you should take it to a far away town were no one knows you and sell it to them.
Seriously I didn't make that up. Look it up.

Just bite the dust for god's sake you're 86 years of age just prepare yourself to die in peace !