Eichhorst: EU Cooperation with Future Cabinet to Remain even if Hizbullah in it 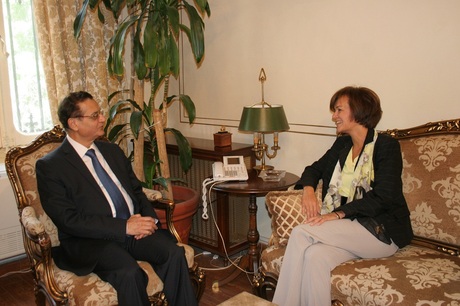 The Head of the EU delegation, Angelina Eichhorst, said on Tuesday that the latest decision to blacklist Hizbullah's military wing would not affect the cooperation with the new Lebanese government even if the Shiite party had representatives in it.

The EU backs the efforts exerted by Premier-designate Tammam Salam to form a new cabinet and cooperates with the caretaker government which is dominated by Hizbullah, she said.

“It will also work with any cabinet that represents all parties and even if Hizbullah was part of it,” she stressed.

When asked if there will be sanctions against Hizbullah officials, Eichhorst reiterated that the unanimous decision taken by the 28 EU foreign ministers on Monday places only Hizbullah's military wing on the terror list.

“Lebanon is an important partner. We hope there would be stability in it,” she said.

“Ties with Lebanon will remain strong,” she said, adding “support for Lebanon will not stop” after the latest decision against Hizbullah.

She echoed remarks made on Monday by French Foreign Minister Laurent Fabius, who said that economic aid would be unaffected.

The ambassador said the EU will announce the details of the resolution on Thursday.

She told reporters that Mansour expressed regret at the EU decision and that she would inform Brussels about it.

He is “worried about the repercussions” of the latest measure, Eichhorst said.

The blacklisting entails asset freezes and paves the way for possible travel bans on members of Hizbullah's military wing. The EU foreign ministers hope it will also curtail fundraising.

But implementation promises to be complicated since officials will have to unravel the links between the different wings within Hizbullah's organizational network and see who could be targeted for belonging to the military wing.

Diplomats late Monday were working on pinpointing the entities and organizations that make up the military wing. Because of this legal uncertainty it was unclear how many assets could be involved, and how many individuals could eventually be targeted.

Hizbullah has no military wing other than the resistance.

Do you really beleive that anyone in Bulgaria believes that there is a military wing of Hesallah? It is a totally terrorist organization and soon Lebanon will be a branch of Iran! Lebanon have no Government, parliament is working illegally due to Hizbullah, so where do you think lebanon's going? To Hell!

Well they are in the basket now!