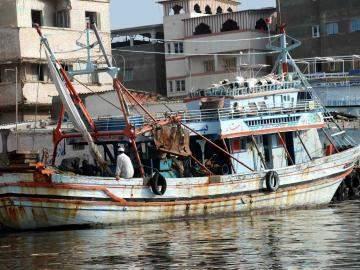 Rescuers searched the seas off Indonesia's Java island Wednesday for possibly dozens of asylum-seekers missing after their Australia-bound boat sank, leaving at least three dead, with 157 saved, an official said.

Local rescue officials estimated there could have been "up to 200" passengers on the boat which was bound for Australia, while a survivor said some 250 had boarded the vessel.

"The 157 rescued have been taken to an immigration center, where they have been given food and water," head of the rescue operation Rochmali, who only goes by one name, told Agence France Presse.

"We have to do proper checks, but they say they're from Iraq, Iran and Sri Lanka," he said, adding that one child was among the three dead.

Police said that the three dead were two children and one woman.

Indonesia's rescue agency was alerted to the incident by Australian authorities on Tuesday evening, Rochmali said.

The boat sank in heavy seas off the fishing town of Cidaun in western Java, from where rescuers set out in their own boats and in vessels lent by the police and fishermen.

An AFP reporter who spoke to survivors said a group of 38, including women and children, had swum for between two and three hours in high seas to reach the shore on Tuesday night.

Their boat was headed for Australia's Christmas Island, which is closer to Java than mainland Australia, when it began taking on water, 42-year-old Sri Lankan survivor Obijet Roy told AFP.

Speaking in broken English, he described how terrified passengers jumped into the sea.

"Water from bottom of the ship is going up and then the passenger panic. Then they down to the sea," said Roy, who added he was heading to Christmas Island with three friends.

Some of the asylum-seekers were wearing life vests, while others were clinging to pieces of wood when the boat went down, he said.

According to Roy, 250 asylum-seekers, mostly Sri Lankans, had traveled to Cianjur from a shelter in Bogor city on six buses to take the treacherous boat journey.

Villager Harun, 49, said he had seen the distressed asylum-seekers coming ashore in Cidaun.

"It was a shocking sight to see clusters of migrants at the beach. More and more came swimming to the shore," he told AFP.

Australia's Daily Telegraph newspaper quoted a man named Soheil saying he was the only survivor of a group of 61 Iranians he was traveling with.

"We have problem with motor after two hour. For three hours, we try to come back (to shore).

"The sea very hard, the sea no good. The ship break," he said.

Soheil said the captain -- who he claimed was a Sri Lankan man using a Malaysian crew -- abandoned them.

"The captain go to small boat," he told the Telegraph.

Australia has struggled to stem an influx of asylum-seekers arriving by boat, with record numbers landing in 2012 and more than 15,000 so far in 2013.

Hundreds have drowned making the journey -- as recently as last week a boat sank, killing four people -- with the latest disaster coming just days after Canberra announced a hardline new plan to send all unauthorized arrivals to Papua New Guinea.

Asylum-seekers arriving in Australian waters will now be sent to the Manus Island processing centre on PNG and elsewhere in the Pacific nation for assessment, with no cap on the number that can be transferred.

Even if found to be "genuine refugees" they will have no chance of being settled in Australia, instead having to remain in PNG, be sent back home or to third countries.

In a bid to smash the lucrative people-smuggling networks, Australia on Sunday also announced it would pay rewards of up to Aus$200,000 (U.S.$180,000) for information leading to their conviction.