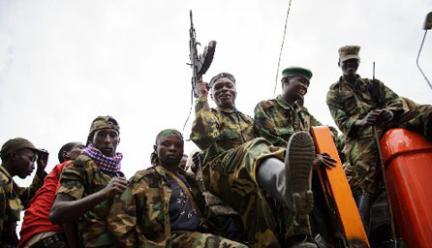 Kinshasa has issued international arrest warrants for four leaders of the Congolese rebel group M23 who have found shelter in Rwanda, the government spokesman said Friday.

The Democratic Republic of Congo issued the warrants on Thursday against the four, who have also been slapped with sanctions by the United Nations, Lambert Mende said in a statement.

One warrant targets Jean-Marie Runiga Lugerero, a bishop and former chairman of the M23, as well as Baudouin Ngaruye, described in the statement as a "self-proclaimed M23 brigade general."

The two other warrants were for commanders Eric Badege and Innocent Zimurinda.

All four are accused of "war crimes, crimes against humanity including murder, imprisonment, torture, rape, sexual slavery, ethnic persecution" and several other charges.

The M23, a mainly Tutsi Congolese group founded in 2012 and operating in eastern DR Congo, split in February this year.

One faction sided with military leader Sultani Makenga and the other with Runiga, the movement's political leader.

In March, Runiga and around 700 fighters crossed the border into Rwanda, which has been accused by Kinshasa and the U.N. of founding and arming the M23.

Kinshasa said Friday it was "keenly awaiting the Rwanda government's reply" and stressed that Kigali had signed a regional deal whereby it agrees not to support armed groups in eastern DR Congo.

Before announcing those warrants Kinshasa could think how to cut collaboration with FDLR group and arrest their military leaders instead of inviting Kigali to arrest deserters of M23 in refugee camp in Rwanda...