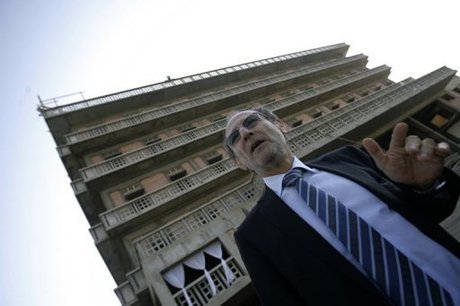 Once a symbol of Beirut's golden age, the St. Georges hotel today is but a hollow shell at the center of an epic real estate battle pitting its owner against powerful developers.

"Before the (1975-1990 civil) war, Lebanon was the world's capital and the St. Georges was the capital of Beirut," recalls Serge Nader, whose family ran the beach adjacent to the hotel until 1997.

"We were the center of the world."

Built in the late 1920s, the hotel was synonymous with Lebanon's glitz and glamour before the civil war broke out, hosting the likes of Hollywood stars Elizabeth Taylor and Richard Burton as well as royalty and other celebrities such as the Shah of Iran, Egyptian diva Oum Kalthoum and the notorious double agent Kim Philby.

The who's who of Lebanon would also gather at the bar, the fabulous outdoor terrace that overlooked the blue waters of the Mediterranean, or the poolside.

It was there that political deals were struck, that journalists gathered to recover juicy tidbits to fill their columns or where spies like Philby, a British intelligence agent turned Russian spy, hung out.

"The hotel was majestic and its location along the sea was magical," said Georges Corm, a Lebanese economist and historian with fond memories of the St Georges. "It was the rendezvous of Beirut's creme de la creme.

"The view over the bay area was spectacular and it was pure bliss at the time to sit on the terrace of the hotel or the beach."

But today, the four-storey pink stone building that was gutted by fire during the war that ended in 1990 still sits empty on the Beirut waterfront, dwarfed by modern high-rises and fancy shopping centers that have sprouted up in recent years.

And while the hotel once enjoyed an unobstructed view of the sea from nearly all angles, it now is surrounded by a marina on one side, an eight-foot (two meter) seawall on another and a new development project built on a landfill into the Mediterranean.

A massive billboard hanging on the side of the hotel reads "Stop Solidere", in reference to the bitter legal battle between the owner Fady Al-Khoury and the company he claims has prevented him from moving forward to restore the St. Georges to its old glory.

"They (Solidere) have prevented the hotel from being rebuilt for 15 years," Khoury told Agence France Presse, sitting by the hotel pool which is still open for business. "They want us not to exist."

Solidere spokesman Nabil Rached said the company, founded in 1994 by then Prime Minister Rafiq Hariri, a billionaire businessman, did not wish to comment on the issue.

Hariri died in 2005 in a massive bombing that also gutted the facade of the St. Georges, which at the time had partially been reconstructed. A bronze memorial statue of Hariri now stands to the left of the hotel, gazing at the huge "Stop Solidere" sign.

Depending on who you talk to in Lebanon, Solidere is described as a company that should be credited with rebuilding war-ravaged Beirut or wiping out its heritage and driving its original residents and merchants out.

The battle between Khoury and Solidere erupted after he challenged the company's bid to build a new marina, which he says infringed on the landmark hotel's historical and legal access to the water.

The legal fight, Khoury says, has stalled his plans to reopen the hotel which he believes will lose its historic and commercial value if access to the water is restricted.

"What they did is apocalyptic," said Khoury, referring to Solidere. "When you stand in the marina they built you can't see the sun anymore, you are surrounded by enormous buildings and once they finish putting up all the other towers the sun won't reach the St. Georges until very late in the day."

But as the legal battle drags on, some question whether anyone really has the hotel's interest at heart.

"Whether it be Solidere or the current owner of the hotel, neither give a damn about the St. Georges, its history or the history of Beirut," said Jacques Tabet, whose father Antoine designed the St. Georges along with French architects.

"This is not about the hotel, it's about money."

Khoury however insists he will never give up the legal fight to preserve the Saint Georges and restore its luster.

"The worst that could happen to it is that it be donated to a church or a mosque -- anything but Solidere."

He said that since Hariri's assassination, literally at the hotel's doorstep, he has worked to refurbish the St. Georges which he hopes to reopen within 18 months to two years.

"People may think I am a Don Quixote, but I am not," Khoury said. "I can't give up on this iconic hotel, witness to the civil war which destroyed it."

may god bless this hotel

Finally, Mafia Hariri & Co., SARL, is being dismantled systematically, and the money that they laundered and robbed will be returned to its lawful owners. Lebanon's Spring is finally a reality. Rejoice EVERYBODY.

The end of hariri era of government means this great symbol of Beirut can rise again. Some say that St George himself struck down Rafik Hariri the dragon. Hariri had tried to take over st georges hotel and prevented it's reconstruction. Hariri built that Saudi Arabian monster of a mosque that over shadows the St George Maronite cathedral. This mosque makes Beirut look like riyadh and ruins the historical architecture of the beautiful mosques and churches of down town Beirut. And of course finally he was killed in front of st georges hotel.

Congratulations to Mr Fadi EL-KHOURY owner of the Saint Georges hotel , for winning the very long battle against the Hariri Mafia Family that wanted to take this wonderful hotel by force from its real owners , like they did with other Lebanese in the Centre ville , called Down town today , or Solidere .

Today with the new government , Mr Fadi EL-KHOURY can count on GMA's support and especially , on minister Nicolas SEHNAOUI from FPM , to start building and restore this wonderful Hotel , that is the Carte Postale of Beirut and lebanon .

Harir era is gone with the wind , and will neverrrrrrrrr come back ! The dossier of Solidere will be open soon .

go and have a look at the sursock nieghborhood to see horror! they destroyed wonderful old houses to build monsters that look like office buildings...
go and have a look at the destruction of the old theater in tripoli that was part of the "patrimoine national" which they destroyed to build a parking lot then it will be a commercial center...
go and look at eddesands which was a public beach a now has become what it is just for money....
go go go.... hundreds of examples can be cited to show the greed of businessmen with the agreement of the "state" and "representatives"....

all the politicians are responsible for the destruction of the national heritage which they destruct just to make money...

so the st georges hotel is no big deal to comment about....

"legal right to water"...NO ONE HAS THE LEGAL RIGHT TO WATER EXCEPT THE PUBLIC. But as we know...the corrupt Lebanese politicians from the dawn of time and not recent, can be bought for a dime. They sold Lebanona and destroyed it. Greed has led to the distructions of Lebanon many a time and we still have not learned anything. The funny thing is that we consider ourselves the cradle of humanity...what a joke!

KEEP UP THE FIGHT MR. AL KHOURY
You will win because you have the support of all the Lebanese who are saddened to see SOLIDERE, among others, litterarily wiping out the glorious history of our city, in the name of greed and development. I praise you and thank you for your noble endeavor, to preserve what is left of the good old and majestic Beirut. No doubt the St. George was and will always remain the symbol of Beirut's golden age. It is an Icon that should be preserved.
No one and that includes Solidere, the government or any other entity has the right to eradicate the history of our beautiful city.

Could someone do something about the bombes Holiday Inn too?

My memories of the fabulous St Georges Hotel in Beirut are still clear in my mind today. At the kind invitation of Fady El-Khoury who was a geed friend in the late 1960s and 1970s my business partner Richard Enders married his Indian fiancée in the Anglican church in the summer of 1972. We had a party of 35 British guests flew out from London with MEA staying in both the St George and Cadmos hotel. We were also welcomed by another good friend Ellie Abdullah who worked at the time for Albert Abele and managed the Cadmos hotel. The fabulous wedding reception was held at the St George where I acted as best man. Many of the wedding party returned to the UK in my Douglas Dakota DC3 G-AMPO from Beirut airport and we spent a few days afterwards staying at the Dome Hotel Kyrenia Cyprus on the way back.
I would love to return to Beirut once the St George is restored to it's former glory