A Night on The Town, Libyan Revolution Style 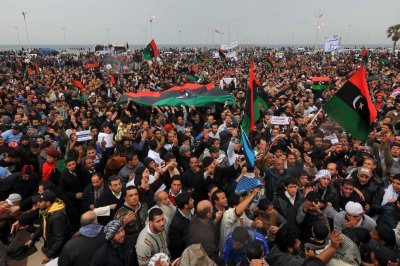 A night out in the eastern Libyan city of Benghazi is not everyone's idea of fun. There are no cinemas, no clubs, only a handful of open restaurants and alcohol is illegal.

But while the war being fought 240 kilometers (150 miles) away is on everyone's mind, Libyans are still game for a night out.

These days the place to be seen in the rebel stronghold of Benghazi is, without doubt, the freshly renamed Tahrir (Liberation) Square.

Bounded by the city on one side and the Mediterranean on the other, the square's concrete heart has been covered by a giant woven mat, converting the plaza into -- in turn -- a sit-down concert hall and an open-air mosque.

Children, families and men of all ages flock there each evening, listening to music, debating politics and finding out the latest news and rumors about the front and the fate of Moammer Gadhafi.

By 9 pm the square is thronged with thousands of people in various states of recline. That is before the faithful snap into regimental lines for Isha, the final prayer of the day, and the real crowds start arriving.

Libya's post-revolution media are also out in force, with Libya Al-Hurra (Free Libya) television filming an endless stream of debates and projecting them live onto the wall of the courthouse.

In a sign of just how much has changed in the Islamic world this year, large U.S., British and French flags fly beside messages of thanks for NATO's decision to save this city's people.

Without irony, a giant portrait of Omar Mukhtar -- a hero of Libya's independence -- hangs beside the flag of Italy, the country that hanged him for insurrection.

On the corniche, which bounds the square to the northwest, there is a long string of tents sponsored by everything from football teams to military forces.

Some contain images of fighting in the city, and in Misrata, the rebel-held port city across the Gulf of Sirte which is still under fire by Gadhafi's forces.

Children and adults queue up to sit in the cockpit of a nearby MiG-23, like the one downed by Gadhafi's forces in the early days of the Battle for Benghazi. The only attraction with a longer waiting time may be the nearby bouncy castles.

"Sometimes we demonstrate and sometimes we play," said 13-year-old Ali Nasser as he waited his turn on one of the quad bikes racing up and down the corniche pulling wheelies.