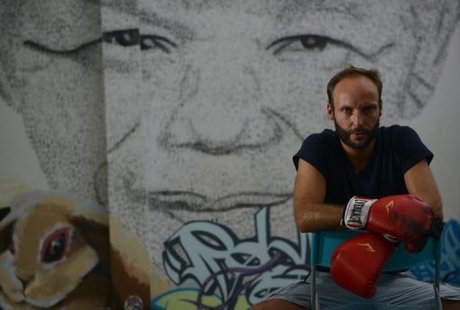 The portrait of Nelson Mandela is -- like the man himself -- forged from violence and endurance, created as the artist pounded the wall 27,000 times with a boxing glove which bore the Chinese character for "freedom".

The resulting Mandela -- a boxer and leader of armed struggle jailed for 27 years before becoming South Africa's president and world-renowned peacemaker -- smiles softly with twinkling eyes and a gentle, knowing gaze.

The mural dominates the Shanghai studio of Belgian artist Phil Akashi, 34, who spent late June and early July punching in the intense summer heat of the city where he has made his home, telling Agence France Presse: "I think I lost three to five kilos in five weeks".

He began the work -- which is six meters (20 feet) high -- after hearing Mandela was battling for his life, entering hospital two months ago and turning 95 there in July.

Mandela's health, said to be critical at times but lately showing improvement, has captured worldwide attention.

Akashi used cinnabar paste, which is associated with life and eternity in Chinese culture, and the color black to represent Mandela's fight against his country's institutionalized racism.

"I really consider Nelson Mandela an extraordinary artist of peace," Akashi says. "He really represents a fantastic source of inspiration for the entire world."

The "freedom" character was on a rubber Chinese-style seal mounted on the glove.

His release from prison in 1990 became one of the most powerful images of the time.

Yet Mandela began his struggle endorsing violence, as commander in chief of the armed underground wing of the African National Congress in 1961, before being arrested three years later.

Akashi believes Mandela, as an international symbol of unification, can inspire China's younger generation even from his sickbed.

Mandela's story might bring a "message of hope", Akashi says, and "inspire some people to act or to fight for freedom".