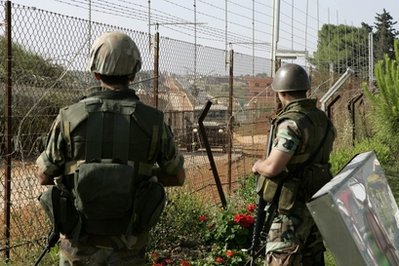 Four Israeli soldiers were injured in a landmine blast along the northern border with Lebanon, media reports said on Wednesday.

"An infantry patrol of the Israeli army penetrated 400 meters inside Lebanon in the Labbouneh area at 00:24 local time," the statement said.

"An explosion took place and the soldiers were wounded, with blood found at the scene. A military committee has opened an investigation in coordination with UNIFIL," the United Nations Interim Force in Lebanon, it said.

An Israeli military spokesperson said Wednesday that the soldiers were hurt during "overnight activity adjacent to the northern border." It did not say if they were injured in training or in combat, and refused to elaborate further.

Israeli media said that the three soldiers were taken into surgery and one is in the ICU.

Netanyahu during a tour of a military compound in the Negev wished the soldiers swift recovery.

According to the state-run National News Agency, a landmine explosion struck the soldiers' patrol, which crossed into Lebanon's southern border and advanced 150 meters inside the Lebanese border village of Labbouneh.

He also assured that Lebanon will file a complaint with the U.N. Security Council.

Media reports said earlier that that two explosions in Israeli territory were heard in Naqoura overnight, followed by sporadic gunshots and illumination bombs by the Israeli army.

However, Lebanese security officials said that seven explosions were heard from the Israeli side of the border.

Later on Wednesday, Israeli troops at the al-Abbad border post deliberately set fire to forestlands in the Lebanese town of Houla, NNA said.

Civil Defense crews and Lebanese soldiers were exerting efforts to extinguish the flames, it added.

"An Israeli field operations room went up in flames in the al-Abbad border area facing the Fatima Gate," Voice of Lebanon radio (100.5) said.

"Lebanese and Israeli army units went on alert on both sides of the border in the South after Israeli troops set on fire forestland in Houla," Voice of Lebanon radio (93.3) reported.

Later on Wednesday, UNIFIL said it has opened an investigation into “the incident involving an explosion that injured several (Israeli) soldiers.”

In a statement issued to the press, the U.N. force said it was informed by the Lebanese army that an Israeli patrol had crossed the U.N.-demarcated Blue Line last night in Labbouneh and that there had subsequently been an explosion.

“UNIFIL immediately launched an investigation into the alleged violation of Security Council Resolution 1701,” which ended the 2006 war between Israel and Hizbullah, the statement said.

“A UNIFIL investigation team is currently at the location indicated by LAF. Our effort is to ascertain if any traces of a possible explosion or other activity can be identified on the ground,” the mission stated.

“At the same time, we have asked the IDF (Israeli army) to provide us details of any incident in the area as alleged and, if so, its precise location,” UNIFIL added.

Probably it was the land mine that was placed by the very Israelis themselves or one of their cluster bombs that littered all of southern Lebanon during 2006 war !
Now that is what I would call a taste of their own medicine !
Anyway what were they doing inside our territory ?
Stop syphoning & stealing our resources , as well as stealing & occupying our land ( including our water ) !
Good luck you IDF continue the way you are & you shall receive more in return , you have been warned !!!!
Signed Wolf ......

The IDF is not God. Some Israeli general made some joke on those lines a few years back. Lebanon 2006 proved it was a joke.
What's crazy is to assume Israel is good for you just because it keeps abusing you.

the facts reamin to come out -- if Wolf speculation is correct that Israel was in Lebanese territory -- then we should agree that Lebanon is entitled to protect its territorial integrity. Whether this was the best way to do it, would remain a question. If the Israelis were in their own territory, I would think that even Wolf -- being the fair minded person he is -- would agree that this was another (remember 2006) unprovoked attack by Lebanon against Israel and Israel is entitled to ptoect its territiorail integrity.

arturo
1- it is not "Wolf speculation" it is the army communique:
"An infantry patrol of the Israeli army penetrated 400 meters inside Lebanon in the Labbouneh area at 00:24 local time," the statement said.

2-if it was inside israeli territory, YOUR SPECULATION that it was an "attack" is completely unfounded, and the non-bellicose reaction of israeli officials seem to indicate they know they stepped on one of their own mines.

Is this how we LEbanese treat friendly neighbors? The "Lebanese" way of treating them is what has come to be known as the Fatfat Way, that is by being a nice tea-offering host and handing them a key of Beirut that's a duplicate to the one Rafic Syria, Syria's best Rafic, had offered to Ghazi Loubnan at the happy and hey days of the darouri, char3i wa mou2aqat. But that was such a lonnnnnnng time ago that the emotionally delicate one have forgotten.

isnt it amazing how he never uses the same username twice, yet we recognize his unique style? i'm a big fan :)

i know, i noticed you recognized him too, that's why i made the comment ;)

these Israelis had nothing to do crossing our border. they got what they deserve.

geha, many posters here are puzzled by your post ....... some thought you were a zionist lover.
thumbs up.

it's always sad to see human beings suffering injuries or maimed.... but they planted the stuff.....

oh zip it for once starsky, just enjoy the moment: israelis getting popped by walking on a mine inside lebanese territory (which is very likely to be their own leftover) --- that has K.A.R.M.A written all over it :)

I cant really see on other websites any info about it being a land mine. Maybe they were setting up some explosives and had the same schematics as assir's buddies

perhaps they were looking for sheep?

Dont jump too fast everyone ,something very fishy ,do you think these zionists are idiots ??? Alla yister ,i am sure they can see every member of HA where he is ,dont under estimate.

We do not need the resistance that stabs the army in the back and shoots down its helicopters.

He also assured that Lebanon will file a complaint with the U.N. Security Council.

I have no problem with this, but he should also follow through on ALL incursions of foreign forces into Lebanon.

What on God's green earth are these fools doing setting alight our beloved forests! Unbelievable.

I also am inclined to believe that it was a mine of their own that exploded (you know, carpet bombing with bombs in the south), otherwise Beirut would have been rubble by now. Damn the jewish leadership and its animality.

MTV: The objective behind the Israeli incursion was to plant tapping devices inside Lebanese territory but a certain mistake happened and led to the explosion of landmines and blew up the plot.

A clear violation of UN resolutions and also the sovereignty of the Lebanese state. Then again, what UN resolution has Israel respected? Almost none!

Amazing how some get easily offended by any Israeli act no matter how minor while they feel no qualms about the Syrian and Iranian regimes continuing disregard of the Lebanese sovereignty and of the well being of the Lebanese.

Why the Lebanese army need to go on alert? is it really going to engage a force 1000 times more powerful that it? that's stupid. Lebanese sovereignty? that's a joke!