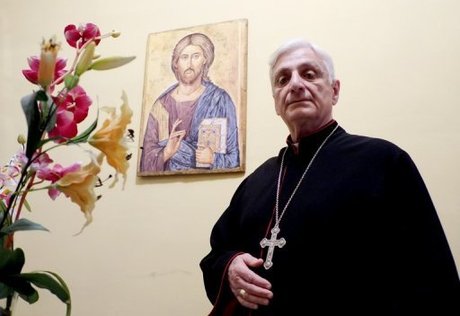 A Syrian Chaldean Catholic bishop on Monday warned that an armed intervention in Syria could unleash a "world war", while the Vatican's official newspaper called for more "prudence" from Western powers.

"If there is an armed intervention, that would mean, I believe, a world war. That risk has returned," Monsignor Antoine Audo of Aleppo told Vatican radio.

"We hope that the pope's call for real dialogue between the warring parties to find a solution can be a first step to stop the fighting," he said.

Audo is also the head of the Syrian arm of the international Catholic charity Caritas and has repeatedly warned about the human cost of the war.

"The drumbeat of an armed intervention by Western powers is becoming ever more insistent and ever less restrained by prudence," it said.

"Several representatives of these countries say they are convinced that the accusation that the Syrian army used chemical weapons is founded -- a question which the United Nations is investigating," he said.

Pope Francis on Sunday called for the international community to help find a solution to the civil war.

"I launch an appeal to the international community to be more sensitive to this tragic situation and to commit itself to the maximum to help the dear Syrian nation find a solution to a war which spreads destruction and death," he said.

The whole intervention my dear bishop is to eliminate the Christian presence in Syria. I know you know that however, the only enemy of Israel is the Christians and the Muslim minorities in Syria. Israel knows that to stay safe it has to convert the whole middle east to Saudi style kind of culture. This culture, as you know