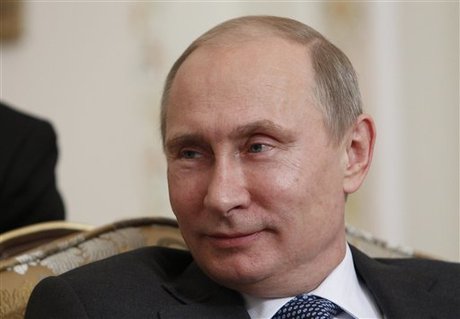 President Vladimir Putin on Friday won the support of Iran and China at a regional summit on Russia's initiative for Syria to hand over its chemical weapons, which he said had proved the "serious intentions" of the Damascus regime.

Putin attended the summit of the Shanghai Cooperation Organization (SCO), a regional security group sometimes seen as an eastern counterweight to NATO, in Kyrgyzstan a day after President Bashar Assad said he supported the Russian plan.

The leaders of the SCO, whose members include Russia, China and several Central Asian states, said in a communique that they supported the initiative and opposed any actions that could lead to a "further militarization" of the situation in Syria.

Chinese President Xi Jinping, speaking at the summit in Bishkek, said his country welcomed Russia's plan and attached a lot of importance to the development of the situation in Syria.

"We support the Russian initiative to hand over Syrian chemical weapons under international control," Xi said.

"We believe that the situation in Syria should be decided politically and without foreign military intervention. All influential and interested sides should lead a constructive dialogue in that direction," he added.

He recalled that Iran suffered horrendous casualties when Iraqi dictator Saddam Hussein used chemical weapons in the Iran-Iraq war in the 1980s.

"Iran, as the worst victim of the use of chemical weapons, favors their destruction across the world. The possibility that armed extremist groups could obtain chemical weapons is the biggest threat to the region," Rowhani said.

Iran and Russia have in recent years emerged as the last major allies of the Assad regime. China has throughout the conflict backed Russia's position but been far more circumspect in its public comments.

Putin said that the global community should welcome Syria's decision to join a ban on chemical weapons, saying it showed the "serious intentions" of Damascus.

"I believe we should welcome such a decision of the Syrian leadership. I would like to express hope that it will be a very serious step on the path to solving the Syrian crisis," Putin told the security summit.

"This confirms the serious intentions of our partners to go along this path," he said, referring to the regime of Assad, whom the Kremlin has backed throughout the two-and-a-half-year conflict.

Speaking at the plenary session of the SCO summit, Putin reiterated his firm resistance to the use of force against Syria.

"Recent diplomatic efforts have allowed to reduce an immediate threat of a military operation," Putin said.

Russia has proposed that Damascus give up its chemical weapons in a bid to avoid threatened military strikes by the U.S.

Assad said he would join the ban on chemical weapons but insisted that Washington renounce the "politics of threats" if it wanted the plan to work.

On Friday, the top Russian and U.S. diplomats were meeting for a second day of key talks to hammer out a plan to secure Syria's chemical weapons.

Birds of a feather flock together

Yes, the world must welcome President Asssad's initiative for peace and stability. Bless you Vladé and Bless Alina Bakayeva who I am sure had a "soft" hand in making this happen. We are forever indebted to you and to president Asssad for saving lives for the sake of humanity. Your own history Mr. Putin, last of which was the free and democratic Moscow mayoral elections of your personal friend, speaks for itself. Your 3rd term in office is yet another example of your popularity among the hip russian generation. Vladé, you are adored by beautiful Russian women and my Alona is no exception. Young Russian men's dream is "I want to be like Vladé". The "patriotic" Syrians and non-Wahabi Lebanese love you too.

as long as bashar massacres with conventionnal weapons everything is ok! but every one gets scandalized when using CW... ironic world!

peace, the world is shocked and disgusted by Bashar but international politics is about interests. what is happening in Syria today is in the interest of many great and regional powers.
Furthermore, why should American or European taxpayers foot the bill to get rid of Assad. Why doesn't Turkey and/or an Arab coalition do it?

Russians voted for Putin. They like him. Russia today has a solid and growing economy and a strong government that has imposed its will and ended the post-soviet chaos.
Putin is doing nothing more than preserving Russia's interests while doing the US and Israel a favour by helping them to get rid of Assad's WMDs. Russia is a power to be reckoned with again on the world stage.
Assad, Khamanei and most Arab regimes in the 20th and 21st century actually managed to impoverish their populations, make them less educated and cultured and push them into religious extremism. Those totalitarian, whether religious or secular, regimes have only brought disaster to their countries.

Talking about education, Baath in Syria, made it mandatory on every child to complete high school. It is illegal in Syria-Baath to remove your child from school before finishing high school. While other governments in the region gave no hoot for the education matter. And for this exact reason, Assad was able to survive the conspiracy. With all the petro-dollar well spent to brain wash the Syrians away from Baath, the Saudi-Qatari managed to recruit 10-15% of Syria into the terrorism culture.

Disaster was brought upon our region ever since the " Balfour Declaration " & then the establishment of a Zionist State in 1948 !
But as history has it the Jews were enslaved under the Egyptians, Babylonians , Persians, & Romans then the Almighty cursed you all then dispersed the Jews among Nations . According to the Old Scripture Israel shall NEVER exist until such time ONLY the Almighty creates it , not Man ! Until then the Zionist has brought the Almighty's Curse with them to Our Region , a State within a State calling itself Israel . History Shall repeat itself upon the Zionist State , they shall have no rest nor peace or Liberty !
Signed Wolf .

The spirit and mind of people like you "WOLF" are much needed especially nowadays: where the petro-sickening-dollar is brainwashing millions into terrorism. Thank you!

last 30 years the world was much better off with Russia broke and off the scene ...