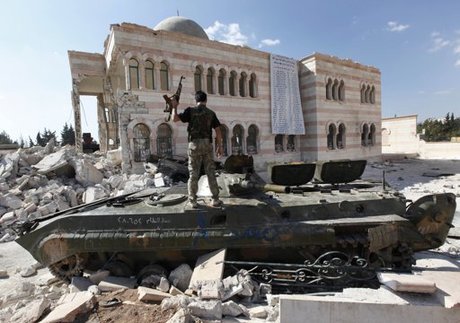 An al-Qaida front group fighting in Syria on Wednesday overran the northern town of Azaz near the border with Turkey after fierce clashes with rebels, activists told Agence France Presse.

"The Islamic State of Iraq and the Levant (ISIS) has seized complete control of Azaz. They are in control of the town's entrances," said Abu Ahmad, an activist inside the town.

Another activist, a resident of the border town, confirmed the report.

"ISIS are in full control. They are detaining people from their homes, and they are manning all the checkpoints," he told AFP via the Internet, speaking on condition of anonymity.

The development comes amid increasing reports of fighting in northern Syria between ISIS and non-jihadist rebels vying to bring down President Bashar Assad's regime.

In a sign that Syria's conflict has grown highly localized in recent months, ISIS has fought side by side with rebels against government troops in other areas of the country.

Abu Ahmad said that after seizing the town, ISIS fighters were "on their way to the (nearby) Bab al-Salameh" border crossing with Turkey.

Bab al-Salameh has for months been under control of local rebels, chiefly the Northern Storm brigade.

News of the seizure of Azaz came after a battle lasting several hours between Northern Storm fighters and ISIS.

Among those reported killed in the clashes was Omar Diab, a media activist from Azaz.

You right Assad is behind these radical terrorists. His Baath culture taught them how to become radicals. While Saudi culture teach people how to be civilized and anti-terror: this is why we have every terrorist in the world including those of Sep 11 are from Syria. The 19 hijackers of Sep 11 came from Tartus, Latakia and most of the Shiaa dominated areas. If I am one of M14, I would really look at myself in the mirror very closely

when and not if but when Iran uses their new nuclear weapon on Jerusalem and/ or New york is a matter for armchair strategists and tacictal natters. all you ahve to do is have a ball of plutonium and a cylinder of tritum and you are set.If the irianian wants to do to
Brack Obama what one of the imanms said on thenews media,then mabye the results will be the arrival of the 12th Imam with blessings for all good BOYS. Girls dont have souls to bunish because they dont have souls
All women must be strictly controlled for everyones safety.
If you dont have a Burkha put a paperbag over your head as a emergency stop gap measure and for all womens safety regardless of muttawinn or sharia
email me at nortonrobert915@yahoo.com

Time for FSA to cleanse these guys off? These jihadists ARE FSA. FSA is the Syrian branch of Al Qaeda!

I hope this fighting among lunatics of all nationalities for the cause of democracy, freedom, peace and human rights in Syria does not spill over to Lebanon and see GabbyMarch14 and BenzonaSanniFirst at each other's throat. takbir

Just what you predicted? You have been predicting that FSA is part and parcel of al Qaida. It is obvious that you and others on here have no idea what you are talking about and continually lump them in the same basket. How can they be one and the same when they are fighting each other? I have been saying that if someone is against Assad, that does not mean he/she is with al Qaida. But some people have a severely limited mentality.

FSA and the Kurds have been locking horns with Qaida/ISIS for a long time now. But some just choose to ignore that fact and create their own.

look at those funny M8ers... when AFP tells things against them they call it a western zionist agency...
but here? no...
they believe it...
go figure how twisted their mid is....

well at least mr tayyip erdogan, the ottoman nazi will not have to travel very far to visit his good friends.

ALL OF ISLAM IS RADICAL AND TERRORISTIC!