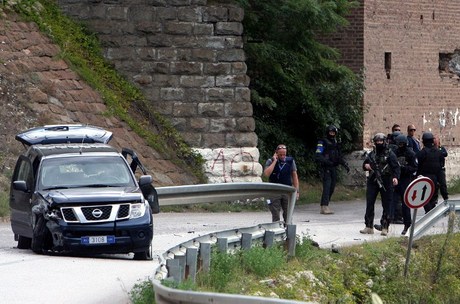 Gunmen shot dead a member of the European Union's police force in Kosovo's flashpoint north on Thursday, dealing a serious blow to the EU-led bid to normalize ties between Belgrade and Pristina.

The shooting, the first deadly attack on the mission since its creation five years ago, occurred in a region controlled by ethnic Serbs who reject Albanian-majority Kosovo's 2008 declaration of independence.

It comes just weeks ahead of local polls in November and amid EU pressure on former foes Belgrade and Pristina to patch up their differences for accession talks to begin.

There was no immediate information on the identity of the attackers but Kosovo Prime Minister Hashim Thaci condemned the shooting as an "ugly and shameful act against the rule of law and order".

The EU mission known as EULEX said in a statement that one staff member was killed when two of its vehicles, carrying six staff "came under fire from unknown persons in the vicinity of the municipality of Zvecan".

The head of the hospital in the nearby divided city of Kosovska Mitrovica, Milan Ivanovic, told Agence France Presse that an EULEX member was admitted with two bullet wounds and pronounced dead moments later.

EULEX was launched in 2008 just months after Pristina unilaterally declared independence from Serbia.

It is mandated to oversee the rule of law in Kosovo and tackle high-profile cases that are sensitive for the local judiciary.

Ashton pledged the EU's continued engagement in the dialogue between the two sides and appealed for them to "redouble their efforts to implement the agreements reached, to normalize relations and to improve the lives of the people on the ground in northern Kosovo," a statement said.

Kosovo political analyst Agron Bajrami said it was "not an ordinary crime" and warned that it would inflict a major blow to the normalization of ties between Pristina and Belgrade.

"It is a huge blow against Kosovo, against the EU and against a process that is unfolding in the north," Bajrami told AFP.

Local elections are scheduled for November 3 as part of a landmark EU-brokered deal in April between Serbia and Kosovo.

Some 40,000 Serbs live in northern Kosovo along the border with Serbia proper and many still refuse to recognize Pristina. The community boycotted the last local polls in 2010.

Earlier this month, Belgrade dissolved four Serb-run municipal councils in northern Kosovo for refusing to cooperate with the authorities in Pristina and take part in the November polls.

But under the April accord, it agreed to encourage the Serb minority in the breakaway territory to comply with the Pristina authorities, provided they are given a certain level of autonomy.

Northern Kosovo has often been the scene of tensions and violence.

In March 2008, a Ukrainian member of the U.N. police force was killed during clashes in Kosovska Mitrovica.

In clashes in November 2011, Serbian protesters wounded some 30 NATO soldiers, of whom two were shot. The international community strongly condemned the violence.

In July, two EULEX officers were wounded in Zvecan when angry Serbs stopped their patrol and stoned their car.

Almost 100 countries, including the United States and most of the EU's 28 members, have recognized Kosovo's independence.