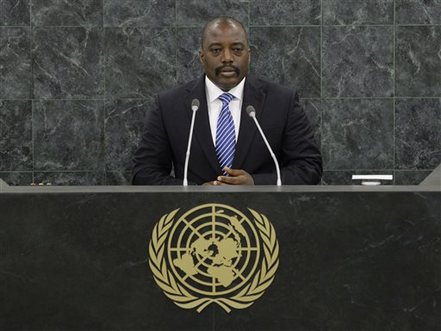 Democratic Republic of Congo President Joseph Kabila on Wednesday condemned the "never-ending aggression" by neighboring Rwanda in a speech at the U.N. General Assembly.

Rwanda's President Paul Kagame was also due to appear before world leaders at the assembly amid international concern over new fighting in eastern DR Congo.

"It is through an act of solidarity by welcoming refugees from Rwanda on their territory, that the Congolese population in the east of my country are now deprived of peace," Kabila said.

"There is room to ask what will be left of international humanitarian law if welcoming refugees in distress is considered enough to justify never ending aggression by the country where the said refugees come from," the DR Congo president said.

Kabila reaffirmed his "determination" to carry out commitments to boost security and government authority in eastern DR Congo under a regional accord made in February.

Kabila, Kagame and nine other African heads of state signed the accord under which they promised not to interfere in the internal affairs of other countries.