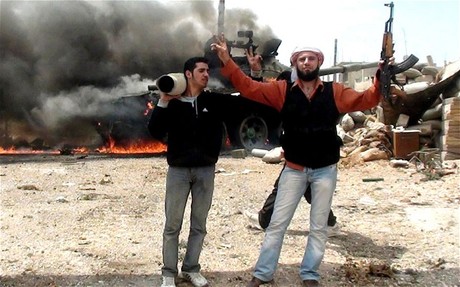 Syrian regime war planes on Tuesday launched strikes against rebels in northwestern Idlib province after they began an assault against two key military bases there, a monitoring group said.

"War planes carried out two air strikes on areas in the town of Maaret al-Numan as clashes continued around the Wadi Deif military base between rebels and regime troops," the Syrian Observatory for Human Rights said.

The strikes came a day after rebel fighters launched a major assault against the two bases in Syria's Idlib province, which is largely controlled by the opposition.

The offensive -- dubbed "The Earthquake" -- aims to seize the Wadi Deif and Hamidiyeh bases, which rebels have laid siege to for almost a year.

Wadi Deif, a garrison housing a large quantity of weapons, lies to the east of Maaret al-Numan, and Hamidiyeh, the last military stronghold in the region still in regime hands, lies to the south of the town.

Clashes continued overnight, and the Observatory said at least 10 regime troops and five rebels had been killed since the assault began.

On Monday, the Observatory said rebels had captured an officer and three soldiers in a raid in Hamidiyeh.

Idlib and Maaret al-Numan activists Tuesday posted a picture on Facebook of a man said to be a captured officer, giving his name as Brigadier General Nasser Salah al-Din.

The photo showed the man, his face bloodied and a bandage wrapped around his head, with his eyes clothes and his upper half naked.

Some 25 brigades and small, mainly Islamist groups are taking part in the assault, including Liwa al-Umma, an Islamist brigade that includes Libyan fighters, according to the Observatory.

Rebel fighters seized the town of Maaret al-Numan last October, cutting off a key regime supply route running between the capital Damascus and Aleppo in the north.

Regime forces have regularly tried to recapture the town, which is a key rebel stronghold in the Idlib region.

Elsewhere in the country, the Observatory reported regime air strikes on Moadamiyet al-Sham, a suburb in the southwest of Damascus, causing casualties.

It also said the death toll in a Monday raid on the town of Shaddadeh, in the northeastern province of Hasakeh, had risen to eight.