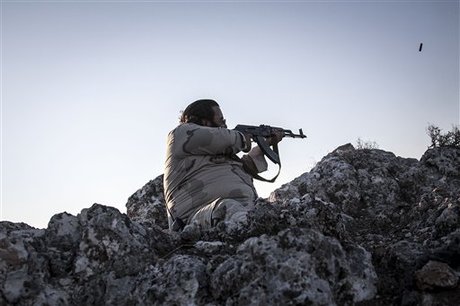 Turkey has shelled positions held by jihadist fighters in neighboring Syria for the first time, the army said, in retaliation for a mortar round that fell on Turkish territory.

"Four artillery rounds were fired on October 15 against a position near the town of Azaz held by the Islamic State of Iraq and the Levant (ISIL)," an al-Qaida affiliated group, the army chief of staff said in a statement late Wednesday.

The shelling came in response to a mortar round that was fired from Syrian territory and fell without detonating near a police post inside Turkey, it said.

Turkey has for more than a year responded when shells from Syria have landed on its territory, but this marked the first time that it has specifically targeted Islamist extremists.

Al-Qaida in Syria is fighting to drive rivals out of areas bordering Turkey and Iraq in a bid to control territory stretching from Iraq into northern Syria, observers say.

Across the north and east, the Islamic State of Iraq and the Levant (ISIL) has set up checkpoints on roads to border crossings, and opened fronts to crush other rebel groups fighting to oust embattled Syrian President Bashar Assad.

Turkey has cut off ties with the regime in Damascus since Assad's deadly crackdown on popular dissent and has so far taken in more than 500,000 Syrian refugees.