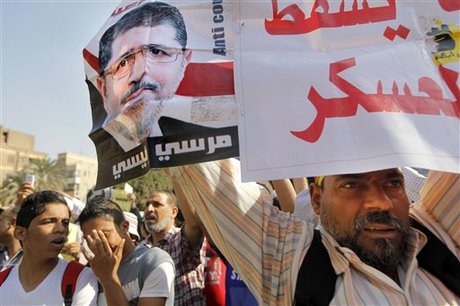 An Egyptian minister on Sunday ruled out negotiations with the Muslim Brotherhood until the Islamists recognize the government's transition plan and renounces violence.

A Brotherhood-led coalition had proposed on Saturday its most flexible plan yet for reconciliation talks, but later said the initiative was aimed at other parties and not the military-installed government.

The latest statements indicate that both sides remain deeply divided since Morsi's ouster by the military on July 3 and that hopes for a reconciliation in the near future are slim.

More than 1,000 people, mostly Islamists, have been killed in clashes with police since Morsi's overthrow, and thousands more arrested.

"There must be a recognition that June 30 was a popular revolution, and the (government's) roadmap was agreed on by the Egyptian people to build a modern state," Borei said.

He added that the Brotherhood should accept that its members on trial on murder and "terrorism" charges "are excluded from the idea of reconciliation".

Much of the Brotherhood's leadership, including Morsi himself, are on trial for allegedly inciting violence before and after the Islamist's overthrow.

The military deposed him following massive protests starting on June 30 calling for his resignation.

The Muslim Brotherhood "has to apologize and stop violence on the street," Borei added.

On Saturday an Islamist coalition led by the Brotherhood offered negotiations to end the deadly tensions that have gripped Egypt since Morsi's overthrow.

The coalition "calls on all revolutionary forces and political parties and patriotic figures to enter a deep dialogue on exiting the current crisis," it said in a statement.

Presidential media adviser Ahmed al-Muslimani said he had no response to the Islamist initiative because it was not directed at the authorities.

"They called for a dialogue with the political forces, not the presidency or authorities," he said.

The Islamists say they are open to discussions on their own terms with the military installed government, including guarantees for "inclusiveness" and respect for the suspended constitution.

But their initiative was aimed primarily at other parties who disagree with the Brotherhood but also oppose the military's domination of politics, said a senior Brotherhood member.

"It aims at expanding the circle of the coalition. There are many who can disagree with the Brotherhood but support the democratic process," said Mohamed Bishr.

Bishr, a member of the Brotherhood's top Guidance Bureau, is one of the most senior Islamist leaders not imprisoned.

"The vision is aimed neither at the government nor the military," he told Agence France Presse, referring to the proposal.

"Many took part in the June 30 protests but oppose the coup," he said of the military's intervention.

The initiative announced did not explicitly mention Morsi's return to the presidency, previously the Brotherhood's key demand.

Bishr said the proposal did not drop the demand for Morsi's reinstatement, but that process -- Morsi's return and his resignation -- would not be discussed before negotiations.

Brotherhood officials have privately said they would be willing to concede Morsi's reinstatement, but wanted their leaders released from prison and guarantees it would be allowed to participate freely in elections.

Government officials have insisted all along the Islamists must unconditionally accept the interim authorities.