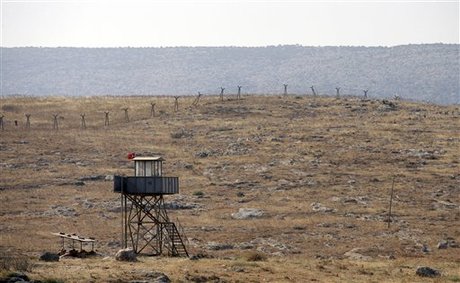 At around 1:30 am local time Sunday (2330 GMT Saturday) the army fired at the Syrians, described as smugglers, after shouting warnings as they crossed the minefield near the village of Yeniyol in the southeastern Mardin region, the agency said.

The bodies were taken to a medical and legal center in the city of Malatya where an inquiry will be opened into their deaths, it added.

The shootings took place near the site of Turkey's controversial construction of what has been dubbed a "wall of shame" in the area between Nusaybin in the Kurdish-majority southeast and the northern Syrian town of Qamishli.

Turkey's government, which is wary of ethnic Kurds on its territory joining up with Kurds in northern Syria and Iraq in a bid to create a de facto state, has denied it was building a "fully-fledged wall".

Earlier this month Turkish riot police fired tear gas and water cannon at thousands of demonstrators who were protesting over the building of the wall in the border town of Nusaybin.

The demonstration was staged the same day as the town's Kurdish mayor ended a nine-day hunger strike in a show of protest against the development.

Turkey has become one of the fiercest opponents of the Syrian regime since President Bashar Assad's deadly crackdown on a popular revolt began in March 2011.

The neighboring nation has taken in more than 600,000 Syrian refugees fleeing the civil war, of which 200,000 are living in about 10 camps along the border region.