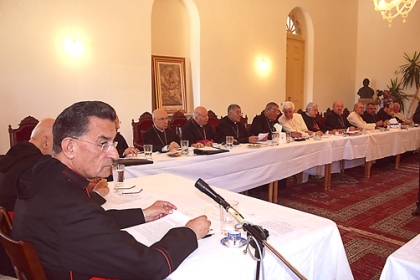 The Council of Maronite Bishops warned on Wednesday against turning Lebanon into the captive of international policies, saying the political paralysis was leading to the state's “disintegration.”

“Some parties abroad have dealt with Lebanon as if it was not a sovereign state,” the bishops said following their monthly meeting under Maronite Patriarch Beshara al-Rahi.

“This does not absolve the Lebanese from responsibility because through their rejection of internal dialogue, some Lebanese groups are forming their own statelets and resorting to friendly countries, making Lebanon the captive of international policies,” they said.

The statement said “the situation of the government and the political standstill began to paralyze the public sector, leading to corruption.”

Such a corruption was affecting the division of power between Christians and Muslims, it said.

The bishops urged politicians to adopt a new electoral law and form a new cabinet to prepare for the presidential elections next year.

President Michel Suleiman's six-year term ends in May 2014. But there are fears that differences and lack of consensus among rival political parties would prevent the parliament from meeting and would lead to a vacuum in the presidency.

The bishops warned of vacuum, saying it would “lead to the nation's disintegration.”

They expressed concern over the security situation in Lebanon and lauded the efforts exerted by the army and all security forces to impose security in the northern city of Tripoli and prevent chaos from spreading.

The bishops also warned from the attack on Lebanon's sovereignty by the Israeli spying through infringement on the telecommunications system and through repeated airspace violations.

The bishops condemned the kidnapping of 12 Orthodox Christian nuns from the Greek Orthodox monastery of Santa Takla in Maaloula in Syria.

“What does this attack mean? What is their link to the conflict in Syria?” the bishops asked.

The nuns were taken by force by armed men two days ago. The abduction has added to fears that hardline rebels trying to overthrow President Bashar Assad were increasingly targeting Christians.

The bishops urged the international community to know their fate and resolve the conflict.