Ambassador: Saudi Ready to Act 'With or Without' West 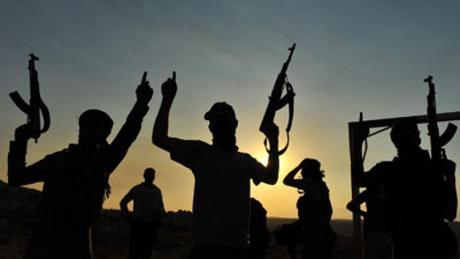 The West's policies on Iran and Syria are a "dangerous gamble" and Saudi Arabia is prepared to act on its own to safeguard security in the region, a top Saudi diplomat said Tuesday.

"We believe that many of the West's policies on both Iran and Syria risk the stability and security of the Middle East," the Saudi ambassador to Britain, Prince Mohammed bin Nawaf bin Abdulaziz, wrote in a commentary in the New York Times.

"This is a dangerous gamble, about which we cannot remain silent, and will not stand idly by," he wrote.

The bluntly-worded warning was the latest in a series of public statements by senior Saudi figures expressing displeasure with U.S. and Western diplomatic initiatives towards Syria and Iran.

Until recently, Saudi leaders rarely voiced public criticism of their Western allies in a decades-long partnership.

But Washington's decision to pull back from military action in Syria and its backing for an interim nuclear deal with Iran has dismayed the oil-rich Saudi kingdom, which views Tehran as a dangerous regional rival.

Citing Iran's backing for Syrian President Bashar Assad's regime, he said "rather than challenging the Syrian and Iranian governments, some of our Western partners have refused to take much-needed action against them.

"The West has allowed one regime to survive and the other to continue its program for uranium enrichment, with all the consequent dangers of weaponization," he wrote.

Diplomatic talks with Iran may "dilute" the West's will to confront both Damascus and Tehran, he said.

"What price is 'peace' though, when it is made with such regimes?"

As a result, Saudi Arabia "has no choice but to become more assertive in international affairs: more determined than ever to stand up for the genuine stability our region so desperately needs."

The Gulf monarchy had "global responsibilities," both political and economic, and he said: "We will act to fulfill these responsibilities, with or without the support of our Western partners."

In a thinly veiled jab at U.S. President Barack Obama, the Saudi ambassador said that "for all their talk of 'red lines,' when it counted, our partners have seemed all too ready to concede our safety and risk our region's stability."

Obama had used the term "red lines" to warn Syria's regime against using chemical weapons. After the regime was accused of firing chemical weapons, Obama threatened punitive military strikes. But in the end he pursued a diplomatic agreement in which Damascus promised to give up its lethal arsenal of chemical agents.

The Saudi ambassador slammed the West for its reluctance to offer decisive help to Syrian rebels, vowing to continue support for the Free Syrian Army and the "Syrian opposition."

Acknowledging the threat of al-Qaida-linked groups in Syria, he argued the best way to counter the rise of extremists among the rebels was to support the "champions of moderation."

we are heading for a long period of instability in the region to say the least.

wake up: this means the whole region will be on the edge and that includes everyone.

Your words are artfully put together like a mosaic from the Irano-Roman detail at the Shapur Palace.

saudi prepared to "safeguard security in the region".. hilarious

oh you didnt get it? that's sad.

movaten, to understand ur irony/jokes, one must be a brainwashed khomeynist or member of liwa abu fadl al abass...

yea, only members of liwa abu fadl al abass think that 90% of terrorist actions around the world are by saudis or saudi-sponsored takfiris/wahhabis/salafists. what was i thinking, in reality true enlightened people see saudi for what they are: a beacon of peace, democracy, freedom and love in the region.

in fact, saudis are so moral and nice and historically persecuted by evil shia, that they ressemble very much the poor israelis.

ft showing more and more his hate of sunnis, ksa is a sovereign state that can deport illegals like usa, france, uk, germany, ect...

Your words are artfully put together like a mosaic from the Irano-Roman detail at the Shapur Palace.

Thanks @mosaic(Frank) for a cordial discussion. Take care and don't stress. Bye friend

This is cheap qomi-style taqiya BS.
Give us a link for ur pseudo fatwa.
Khomeynists are the biggest takfiris in the region.

1-takfiri criminals are beheaded in ksa not in lebanon
2-iran doesn't have sharia
3- give me 1 saudi decree allowing the justified killing of Shia just because of their religious beliefs. Iran has such policies towards sunni iranians.
4- Modernization and Technological advancement of Iran ? i can tell u don't know much about Iran or technologies or both...But i have to admit they're good at BS and photoshop

Go on KSA, defend the muslims being slaughtered in Syria, u've people support from casablanca to jakarta, from sajarevo to muscat.
Defeat the khomeynists and their allies. Don't care about the west or east, just care about Allah...

Cedre ... yet another Lebanese that wants Lebanon to become a Wahabbi Caliphate of the KSA ...

when did i say that u cheap khomeynist propagandist ?
When i read hizbos like u, i dream of lebanese citizenship given to the millions of maronite diaspora so this country becomes 70% christian. That's our only way to leave peacufully and have proper rights.
Lebanese sunnis know too well that if Hizbos take power through weapons and demography, u're goin to do to us what u did to qusayr, homs or damascus people.

"cedre...When i read hizbos like u, i dream of lebanese citizenship given to the millions of maronite diaspora so this country becomes 70% christian"

Why do persons who are NOT Sunnis always try to act like they are Sunnis? BTW, Almost all of the "maronite diaspora" who were not born in Lebanon (like Ralph Nader and carlos Slim) have no interest in becoming Lebanese citizens.

Einstein, muslims/sunnis represent the vast majority of the victims.
Anyway, such insult coming from u ft, I take it as a compliment, especially after ur comments yesterday about the death of syrian kids. I had a doubt about u, but now I'm sure u're not different about the heartless brainlees khomeynist propagandist that pollute naharnet.

I'll never live in lebanon if it doesn't change, but i could live anytime in ksa, kuwait,uae,qatar. I guess u've never been there and visited christian lebanese. Go and ask them about they're life. U go to Dubai's malls starbucks and u'll think u're in ashrafieh. Go and see how our christian are doin well over there, have local friends, etc..

The KSA can barely defend themselves against their mostly sunni people who hate them for persecuting the entire population, and for being puppets for mostly Zionist controlled America. If it was not for the vast oil wealth, the Royal family in Arabia would not have lasted more then a day in power. They would be the laughing stock of the Arab world.

Most Sunnis in the world are more interested in liberating PALESTINE. This shows that you are NOT a Sunni.

do u think the million+ sunnis of this country will let lebanon become part of wilayat faqih ? U should learn from syrian people courage...

lebanese sunnis never asked a sharia state, we're about 25% of population, mostly not very religious people.
Meanwhile, hizbos are building a diet wilayat faqh in iran.
We do not want a khomeynist dominated state/resistance/army intelligence,etc...

I've never read such a sectarian argument. Why don't speak to each other as humanitarian rather than sectarian.

A byproduct of western approach (as an unintended consequence) is a Saudi-Israeli alignment, which could pave the way for a solution for Palestine. Better be lucky than good, John Kerry might achieve wothout even trying, what all of his predecessors have failed.

The continuing sectarian fight between the Khomainy's and the Wahaby's will keep turning the whole Middle East into a living hell.

BTW, with the tens of billions of dollars spent on weapons by the KSA each year, their forces could not even defeat the Huthi rebels in Yemen on their border. The Saudi people do not want to fight and die for the corrupt and criminal Royal Family.