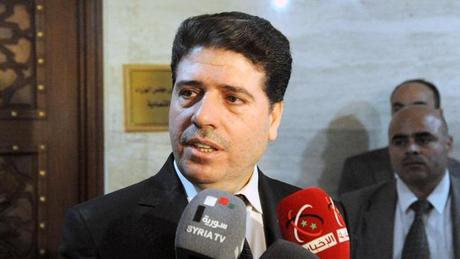 Syrian Prime Minister Wael al-Halqi stated that the Lebanese government can be held “partially” responsible for the developments in his country, reported al-Akhbar newspaper on Saturday.

He told the daily: “The Lebanese government has interfered in Syrian internal affairs.”

“Part of what Syria has been a victim of can be attributed to the policies of this government,” he added.

Moreover, he accused the government of failing to disassociate itself from Syria.

Halqi explained that the government helped facilitate the infiltration of gunmen into Syria, adding: “Terrorist activity would still be ongoing had it not been for Hizbullah's presence on either side of the Lebanese-Syrian border, especially Syria's al-Qusayr.”

Furthermore, the Syrian official said that contacts between the Syrian and Lebanese government's are nonexistent, revealing that the only communication between Syria and Lebanon is taking place with the latter's foreign ministry.

“The current relations do not represent the historic history between the two countries,” lamented Halqi.

The Lebanese government has adopted a policy of disassociation from regional developments, especially those in Syria.

It adopted the Baabda Declaration in June 2012, which calls for keeping Lebanon away from regional conflicts.

Hizbullah has however acknowledged that it is involved in the fighting in Syria alongside the country's regime against what it called extremist takfiri groups.

"Moreover, he accused the government of failing to disassociate itself from Syria. Terrorist activity would still be ongoing had it not been for Hizbullah's presence on either side of the Lebanese-Syrian border, especially Syria's al-Qusayr.”

I personally don't see any contradictions in his statement!

I want to take this opportunity to wish a special poster @geha a Happy Birthday and wish him continued health and speedy recovery. Get well geha and enjoy your special day.

What audacity!!!! Now, the Syrian regime is accusing Lebanon of meddling in its affairs. For 40 years they meddled in our affairs and got involved in the tiniest detail of Lebanese political and social life.

Interesting to note, the world classified and considers HA a terrorist organization but HA and Syria are fighting terrorism. The irony.....!

Whatever comes around goes around. Soon Assad will join the dustbin of history like his criminal predecessors, staline, hitler...

@mckinl
Normally, I am more congenial but in your case am willing to make an exception.
ANY universe in which the likes of you do not exist will be just fine for the rest of us.

yea alawite assad finance extremists whose sole purpose is to kill alawites. makes total sense. i bet takfiris were loving working for him as well.

“The Lebanese government has interfered in Syrian internal affairs.”
This is the most ironic sentence I have ever read in my entire life...
I am not saying it did or it didn't.
But just think about it.

no but apparently comic book heroes do

If you have a problem with the Lebanese government complain to your president he set it up we had nothing to do with it.

if i may add, this lebanese governement doesn't represent the lebanese people.

Then go back to Syria and leave Lebanon to the Lebanese.

How ironic! If it wasn't for Syrian government and Hizballah's continued meddling in Lebanon, Lebanon would have been the jewel of the Middle East.

in fact what he is saying : almost all Lebanese politicians were agent to Syria and now they betrayed her which put all our so called leaders, politicians,.... agents to Syria and should be tried in court with the Syria's regime men in due time
democracy and arab spring in gulf countries now

Your a joke! You say ...ALL of this happened before the HA got involved!!!!! You mean officially got involved!!! Look I remember how from almost Day one of the revolution accusations AND witness accounts pointed to HIZSBHITAN BEEN involvement... And KSA and Qatar and everyone!
Now that's not far from the truth is it???

Well, considering that it is an Iranian puppet government...

If ur asking for FannyThrower , he is awaiting confirmation from his masters before he can start posting dribble.

everyday he gets instructions from the FPM politibureau....

does that includes the Hizb fighting alongside his troops ?what a hypocrite .