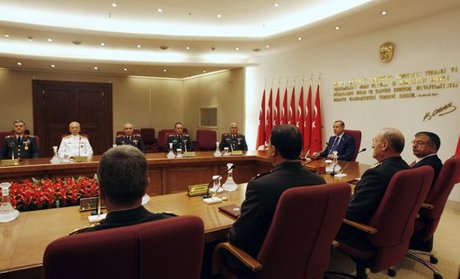 Turkey's Supreme Military Council assigned new names for the army's top brass Thursday after the shock mass resignation of its highest command in a row with the government.

"The decision of the cabinet is expected. We have no problem about that. The name for the post of chief-of-staff is obvious," Ahmet Sever, press adviser to the president's office, said in televised remarks, referring to Ozel.

General Bekir Kalyoncu was appointed as the chief of military police, he added.

The council decided to extend the tenure of 14 generals and admirals who are charged with attempting to overthrow the government, Sever said. The officers will remain in their posts for one year, without promotion.

Armed forces chief Isik Kosaner and the separate heads of the army, navy and air force all dramatically resigned last week in a row with Ankara over the promotion of dozens of officers held in a probe of alleged plots to oust the government.

The annual meeting of the council to review the promotion prospects of senior officers opened Monday under the direction of Prime Minister Recep Tayyip Erdogan but, for the first time ever, without the country's four top generals in attendance.

Tensions between Turkey's fiercely secularist military and the government led by the Islamist-rooted Justice and Development Party (AKP) have been building for years.

About one tenth of the army's generals are in custody over an alleged 2003 coup plot that AKP officials say was hatched shortly after the party took power in 2002.