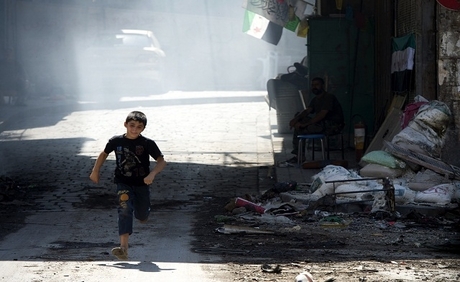 The brutal war in Syria could grind on for a decade as Iran and Russia prop up President Bashar Assad's regime and jihadist groups flood the battlefield, experts warned Thursday.

Assad has chosen a deliberate "Machiavellian strategy" of standing by while militant groups such as al-Nusra and the Islamic State of Iraq and the Levant flourish, leaving the U.S.-backed moderate opposition fighting on two fronts, lawmakers were told.

"It's now clear that Assad's fall is not the inevitability that many analysts believed a year ago," said analyst Daveed Gartenstein-Ross, referring to former confident predictions by the U.S. administration that Assad's days were numbered.

"The likeliest scenario is that which the U.S. intelligence community now predicts, which is the war continuing for another decade or more," he told the Senate foreign relations committee.

Geneva peace talks, orchestrated by the United States and Russia, collapsed in late February after just two rounds and there is no date for their resumption.

Meanwhile, the Syrian president's position has been bolstered not just by weapons and cash from Tehran and Moscow, but also by his "brazen willingness" not to intervene against the militant groups.

"The major role jihadists now play has deterred Western countries and others from throwing significant weight behind the opposition," argued Gartenstein-Ross, an expert with the Foundation for the Defense of Democracies.

This month marks the third anniversary of the March 15, 2011 peaceful uprising against Assad's ironclad rule, which was sparked in the early heady days of the Arab Spring.

It was met by a brutal crackdown by Assad's forces. So far, 140,000 people have been killed, another 2.5 million Syrians have fled across the borders and a further 6.5 million are displaced inside the country.

Gartenstein-Ross described the policy of the U.S. administration, which has steered clear of providing rebels with heavy weapons while pouring humanitarian aid into the country, as "confused" and lacking a "desired end state."

"The Syria war is a major tragedy, and it's likely to have a tragic ending. And the U.S. is probably unable to avert that even if we choose to become more deeply involved."

The flow of foreign fighters into the conflict also posed very real risks across the world, as the "majority of radicalized fighters are going to go home and attack their homes in the region before they come and strike in Europe or in the United States," said Matthew Levitt, an expert with the Washington Institute for Near East Policy.

He cited examples of suicide bombers already sent to Tunisia, of Libyan and Moroccan groups now operating inside Syria.

"While the war itself might at some level be negotiable -- maybe -- the sectarianism is not, and is almost certainly going to create conditions for instability over the next decade."

Deputy Secretary of State Bill Burns denied however that the U.S. administration believed it was now better for Assad to remain in place as extremists posed a greater threat to America's national security.

"I remain firmly convinced and the administration does that Assad is a magnet... not only for foreign fighters and violent extremism," Burns told senators.

"As long as Assad remains the civil war will continue and get worse and the dangers of spillover will get worse as well," he added.

Burns acknowledged that "on Syria we've been frustrated by, you know, large dimensions of Russian behavior and actions."

But he insisted that Washington was still working with its partners such as Saudi Arabia to see what could be done, as well as looking "at ways in which we can step up our own support for the moderate opposition."

dont need an expert to know that, just a lebanese...

interesting, only yesterday the paid mouthpiece said it will be over soon)

They are not misled.... they are more than willing to go there and kill civilians.