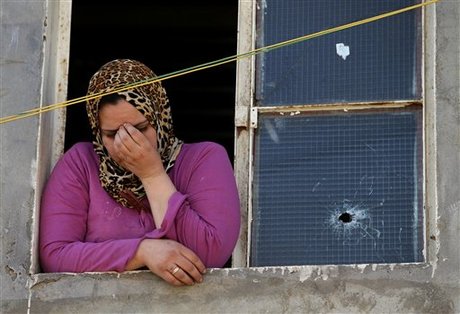 Syria has failed to comply with a U.N. resolution calling for unimpeded humanitarian access to civilians throughout the country, the Human Rights Watch group said on Friday.

By refusing to allow aid to cross opposition-held border crossings, the Syrian government "is undermining aid deliveries to hundreds of thousands of desperate people," the group said.

In February, the U.N. Security Council urged all parties to the Syrian conflict to allow aid to cross conflict lines and borders to reach civilians.

Since then, the Syrian government has allowed aid to enter the country through a regime-held border crossing with Turkey in the northeast of the country.

But it has refused to allow aid groups to use rebel-held crossings, HRW said.

"No one should be fooled by Syria's agreement to open a single border crossing in the north," the group's deputy Middle East and North Africa director Nadim Houry said.

"Syria's arbitrary refusal to agree to the use of opposition-held crossing points sentences hundreds of thousands of Syrians to deprivation and disease."

"The UN organisations cannot enter the Syrian border without official authorization from the government, whether they control the border crossing or not," he told Agence France Presse.

"And the Syrian regime had been withholding the authorization," he added.

Human Rights Watch said a report to be presented to the Security Council later on Friday would say Syria's government was also blocking aid to some 175,000 civilians under regime siege.

HRW also laid blame on the armed opposition, saying the report would say they had blocked aid to some 45,000 civilians in other besieged areas.

HRW urged the Security Council to take punitive measures against Syria's government for failing to comply with the aid access resolution, including an arms embargo on the government and any group implicated in rights abuses.

Syria has nine land borders with Turkey, and only one of them, the Qamishli-Nassibin frontier in the Hasakeh province is controlled by regime forces. The others are held by rebels or by Kurdish fighters.