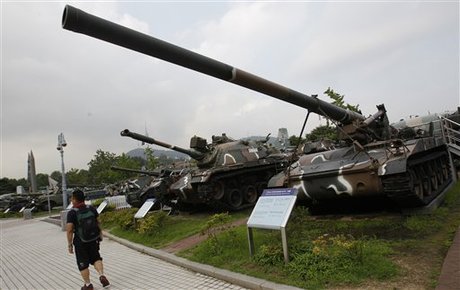 South Korea and the United States launched a massive joint military exercise on Tuesday, prompting the North to condemn the maneuvers as provocative and warn that "all-out war" could erupt.

The two allies have described the 10-day Ulchi Freedom Guardian exercise as defensive and routine but the North habitually terms such joint drills a rehearsal for invasion and launches its own counter-exercises.

All of CFC's major units are taking part, involving more than 530,000 troops, including some 3,000 military personnel from the United States and other bases around the Pacific region, CFC said.

U.S. General James D. Thurman, Combined Forces Command Commander, said the drill was focused on "preparing, preventing and prevailing against the full range of current and future external threats" to South Korea and the region.

"We are applying lessons learned out of Iraq and Afghanistan, as well as those garnered by the Alliance's recent experiences with North Korean provocations on the peninsula and past exercises," he said.

Pyongyang condemned the exercise as "extremely provocative", calling it a preparation for an "all-out war" against the North and the "largest-ever nuclear war exercise".

"The Korean peninsula is faced with the worst crisis ever. An all-out war can be triggered by any accidents," the North's ruling communist party newspaper Rodong Sinmun said in a commentary.

Seoul and Washington wanted to use the latest exercises to build up their capability to mount surprise attacks on the North's nuclear and missile facilities, it said.

"The U.S. war-mongers are planning to carry out a realistic war drill to remove our nuclear facilities with a mobile unit led by the U.S. 20th Support Command which was sent to Iraq to find and disable weapons of mass destruction," it said.

"Our military and the people will not sit idle as U.S. imperialists mobilize massive military forces and threaten our sovereign rights."

It accused the United States of seeking to bring war to the Korean peninsula after Afghanistan and Iraq as a way to "extricate itself from its worsening economic crisis".

The CFC spokesman said that during the exercise, troops would train for a "wide variety of missions including those involving the location and security of chemical, biological, nuclear and radiological threats".

Professor Yang Moo-Jin, of the University of North Korean Studies in Seoul, said the North was unlikely to escalate tensions despite its criticism of the exercise, one of two annual Korean peninsula-wide drills by the CFC.

"The North is unlikely to raise tension at a time when diplomatic efforts are underway to resume dialogue" even though the North's Tuesday statement is strongly-worded, Yang told AFP.

The North's military urged Seoul and Washington last week to show their willingness to work towards denuclearization by scrapping the exercise.

In an open letter published by its official news media, Pyongyang also called for a peace-keeping mechanism to replace the current armistice that ended the 1950-1953 war.

A flurry of diplomatic efforts have been under way to resume stalled six-party disarmament talks involving the two Koreas, Russia, China, Japan and the United States.

Senior Pyongyang officials met their counterparts in Seoul and Washington last month, raising hopes that the talks -- last held in December 2008 -- could resume.

The North has repeatedly expressed a desire to return to the forum, but the United States has urged it to show more sincerity and mend ties with the South first.

"The dogs bark and the caravan passes"

The case of the Korean border is almost as clear-cut as the case of Israeli racism. Just as "Jewish state" tells you that non-Jews are "out of luck", the border that the UN (US, that is) drew between the two Koreas in 1953 is a crooked line that favors the south. What mediator draws a crooked line instead of a straight line? And then this mediator says the victim needs to show more "sincerity". The question raised is, does South Korea have a democracy, any more than Israel does? Democracy without law or justice is a lynch mob.