Lieberman Lashes Out at Erdogan Over Apology Demands 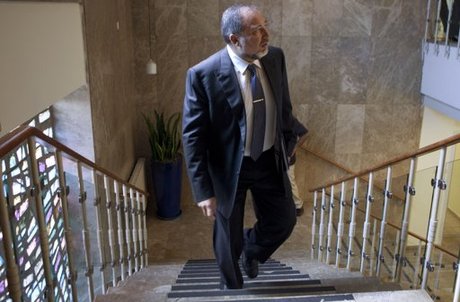 "The Turkish prime minister wants to undermine the legitimacy of the state of Israel by demanding an apology that would constitute an admission of guilt and undermine our right to self-defense against attacks from Gaza," he told public radio.

Diplomatic ties between Israel and Turkey have been in crisis since May last year when Israeli commandos staged a deadly raid on an international aid flotilla trying to reach Gaza in defiance of an Israeli naval blockade on the Palestinian territory.

Nine Turkish nationals were killed in the operation, and Turkey says its once-close relationship with the Jewish state can only be restored with an apology for the deaths. Until now, Israel has refused.

Lieberman's remarks were made a day after Israel's army radio reported that U.S. Secretary of State Hillary Clinton had called Prime Minister Benjamin Netanyahu to ask that he apologize to Ankara, and that the premier had refused.

Clinton's office dismissed the report as "inaccurate" and a similar denial was issued late on Wednesday by a spokesman for Netanyahu.

"The media reports which claimed that U.S. Secretary of State Clinton pressured Prime Minister Netanyahu to apologize to Turkey are incorrect. Israel and the U.S. are cordially working together to solve the issues in Israel-Turkey relations," spokesman Ofir Gendelman wrote on Twitter.

Later on Wednesday, Erdogan vowed that Turkey would never back down from its demand for an Israeli apology.

"As long as Israel does not apologize, pay compensation and remove the embargo over Gaza, it is impossible to heal relations between Turkey and Israel," he said.

A United Nations report into the flotilla affair, whose publication has been postponed at least twice this year to allow time for the two sides to reconcile their differences, is due to be released on August 20.