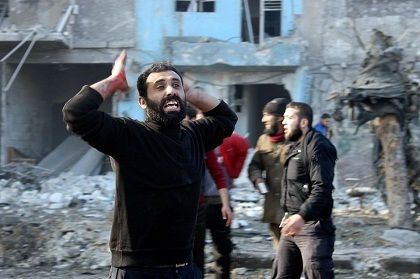 More than 50 people were wounded in the blast in Al-Horra, SANA said, blaming the attack on rebels fighting to overthrow President Bashar Assad.

"Terrorists exploded a truck loaded with a large amount of explosives," SANA quoted a policeman as saying. "It is estimated that the explosives weighed three tonnes."

The Islamic Front, a rebel coalition, claimed responsibility for the attack. It said on Twitter that a radio-controlled bomb had targeted a "gathering of Assad militia".

The Syrian Observatory for Human Rights said 38 people were killed, most of them civilians including women and children, as well as security personnel. It also said more than 40 were wounded.

On Thursday, a car bomb exploded in the city of Homs, south of Hama.

The Observatory updated its toll for that attack, saying at least 14 people were killed, including 10 civilians, in a neighborhood populated by Alawites, the Islamic sect to which Assad belongs.

No one claimed responsibility for what was the second attack in Homs -- Syria's third largest city -- in less than a week, but state television blamed it on rebels.

Meanwhile, in the eastern province of Deir Ezzor on the border with Iraq, the Islamic State of Iraq and the Levant (ISIL) made fresh advances and took over the town of Muhassen and two other villages, the Observatory said on Friday.

The advance comes despite bids by poorly armed rebels seeking Assad's overthrow and their Al-Nusra Front allies to push ISIL out of Syria.

ISIL has spearheaded an offensive over the past week in Iraq, which has seen Mosul, Iraq's second largest city, fall from government control.

Some anti-Assad opponents initially welcomed ISIL in Syria's war, but the jihadists' systematic abuses have since earned the opposition's wrath.

In Aleppo province, in northern Syria, the loyalist army and allied forces recaptured Adnaniyeh village from rebels, the Observatory said.

The aerial offensive is estimated to have killed some 2,000 people, including more than 500 children, since January alone.

Keep up the good work my brothers