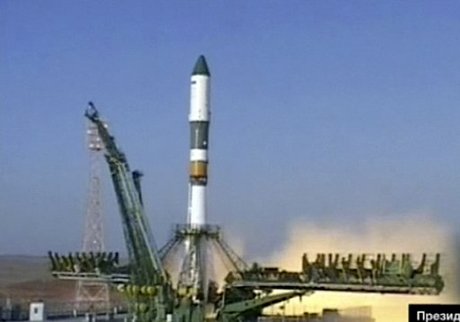 Russia has grounded its Soyuz rockets after one of the unmanned craft crashed shortly after blast-off while carrying tons of cargo for the International Space Station, a space official said Thursday.

"A decision has been taken to halt the launch of Soyuz carrier rockets until the reasons for the accident become clear," the unnamed Russian official told the Interfax news agency.

Wednesday's accident has raised concerns over the reserves of the six crew members on board the station and clouded the future of an ISS program that relies almost exclusively on Russia following the retirement of U.S. shuttles.

Both Russian and U.S. space officials took care to dispel suggestions that the accident may prompt an emergency evacuation of the ISS crew.

Space officials from both sides said the team -- which besides three Russians includes two U.S. astronauts and a spaceman from Japan -- had at least two months of supplies of food and other basics.

But Russia's immediate launch schedule was thrown into doubt Wednesday when the Roskosmos space agency removed all reference to future missions from its official website.

The next manned flight to the ISS is scheduled for September 22 and a cargo vessel with new supplies is due to take off on October 28.

Both flights rely on various modifications of the Soyuz carrier rocket -- a Soviet-era model whose importance has been magnified with the retirement of the U.S. shuttle program this year.

Roskosmos said Thursday that it was fully committed to supplying the ISS with both cargo and crew despite the setback.

The agency said Roskosmos chief Vladimir Popov held an emergency overnight meeting in which he requested "additional proposals on ways to provide support for the International Space Station and unconditionally meet" Russia's commitments to it.

But some in the Russian media said the fifth launch failure in the past nine months showed that the once-proud industry was entering a period of crisis.

"The series of launch accident points to a deep crisis," the respected Kommersant business daily said on its front page.

"More and more of Russia's craft fail to reach orbit," it said.