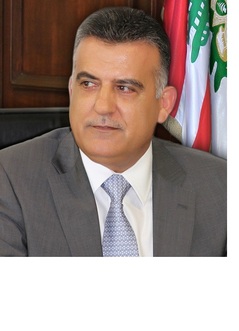 “I was surprised to read an article attributed to me concerning an alleged document over an assassination bid targeting Ibrahim,” Abou Araj, who is of Lebanese origins and holds the Israeli citizenship since 2000, told An Nahar newspaper in a letter published on Saturday.

The reporter wondered about the source of the “false news,” saying that she didn't publish any report on the matter and has no information about the alleged document's content.

On Friday, An Nahar newspaper said that Abou Araj revealed in an article that an armed group affiliated with the Qaida-linked Abdullah Azzam Brigades is plotting to target a high-ranking security figure reportedly Ibrahim.

She said in her alleged report that the Mossad received the information through its agents who are operating in Ain el-Hilweh Palestinian refugee camp in southern Lebanon.

However, Abou Araj slammed An Nahar journalist Abbas Saleh, questioning his intentions that compelled him to write such a report which contained “random names.”

She challenged Saleh to “highlight a single proof that validates his claims.”

On Friday, a suicide bombing rocked the Dahr al-Baydar crossing in the eastern Bekaa region shortly before General Security chief Abbas Ibrahim had crossed the area.

The blast killed an officer and wounded several other people.

Abou Araj also lashed out at Lebanese media saying: “despite I am currently in Israel, I remain a Lebanese.”

Saleh's report claimed that the Mossad agents intercepted phone conversations between a terror group in Ain el-Hilweh refugee camp that indicates a huge assassination bid is being plotted.

It said that a booby-trapped car was being prepared inside the camp by Chechen experts to be delivered to a Palestinian delegation that holds routine meetings with Ibrahim, without its knowledge.

The alleged report said that Abdullah Azzam Brigades is seeking to assassinate Ibrahim since the Abra clashes between Salafist cleric Sheikh Ahmed al-Asir and the army in June 2013.

abou arraj is a moussad employee. her brother samer was running the israeli cells in Lebanon.

samer and his father were officers in lahds army and they did many bad things to the people of the south. the father was killed by one of his own men before the Liberation of the South.

abou arraj is a moussad emplyee. her brother samer was running israeli cells in Lebanon that were caught in 2009 by the Lebanese security forces.

both are the children of an officer in lahds army and samer as well as his father did very bad things during the occupation. the father was killed by one of his own men before the Liberation of the South.

Palestinians and Syrians supported by fringe extremist Sunni Lebanese... Déjà vu for Lebanon 40 years later. No lessons learnt. This is the result of an education system that ignores history and political amnesia.

I don't have hatred for any of my Lebanese brothers. I feel ashamed of our country for not educating the youth on what happened in the past. If you don't know what mistakes we made in the past, we can't learn from it and we are destined to repeat them. This is fact zeinabgahba. In the 1970s, Palestinians fought the LAF and they were supported by some sectarian misguided Sunni and Druze lebanese. Syrians got involved and next thing you know is its déjà vue. This is facts that you unfortunately don't know... This is my point!

Sorry Mr Ibrahim, but is is very clear that this explosion was planned, prepared and executed by syrian regime and HA. stop BSing people. you are much worth than da3esh

"45-year-old cleric who supports the overwhelmingly Sunni rebels..." Really, a cleric? I guess no need to worry about the devil coming.