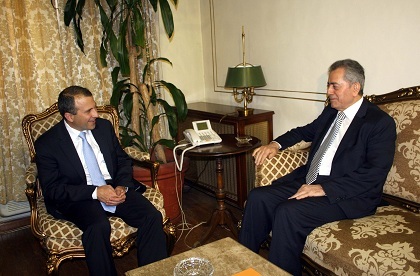 A suggestion by Foreign Minister Jebran Bassil Friday that refugee camps be set up along the country's border with Syria was swiftly rejected by Damascus's ambassador, Ali Abdul Karim Ali.

Bassil "met ambassadors from the powerful five permanent members of the U.N. Security Council today (Friday) and discussed with them the establishment of camps for Syrian refugees along the border," a ministry statement said.

Those talks were followed by a meeting with Ali to discuss the question of refugees, who now number more than a million in Lebanon.

"We are against such camps... Syria is a large country that can accommodate all of its citizens," he insisted.

More than three years of conflict have created millions of refugees in addition to more than 162,000 dead,

Why does syria they oppose such camps ?
Syria has always been a burden on Lebanon and on its people, because of its lack of governance under the dominance of machiavelic Assad familly

Great, then take them back since you claim they all voted for Assad.

No, those who voted for Assad are his people, the towns that Assad is suspicious of will not count their voting ballots which is why he's always at 90+ votes.

Agreed, better late than never come.
This is eventually going to effect Eastern Europe economy as well because the Syrian Ladies are at $3 per day. Status Quo is a Boost to the Syrian economy.

What Ali is say is, "since these people have left Syria and associated themselves with terrorists, it is natural from the to come back to Syria and reside in the Opposition-controlled area such as Raqa and Dier Alzour. And if they can not travel, Syria is willing to air-lift them to the mentioned areas." End of quote.

I believe the problem is a social and cultural ones. Judging from history, our brethren of Sunni-faith have a tendency to rather living in a poor-developed camp instead of developed neighborhood.
Look at our Palestinian refugees, they passed on every oppertunity to develop their camps regardless of the money was given. Living poor and in a mess kinda more tribal-style unfortunately our Sunni brethren still enjoy. I know someone might say, they do it this way because of their intention to go back to their home land. Well look no further than any Sunni-wahhabi neighborhood in any country: tribal-style.
Ok, someone is going to shoot me on this, fine, I am here for you. And please do not tell me look at the Sunni-wahhabi in Beirut: well I have some news for ya, thanks to the Christians of Lebanon.

He doesn't want them back, they're in the process of establishing an Alawaite state, Sunni need not apply...

Let's be somewhat grounded in reality. There isn't enough allawites to establish a state... Sunni Syrians are not all against the state and most just want to return to normal life they onced enjoyed. Stop this sectarian rubbish... Children being killed and families completely destroyed by a dillusional foriegn sectarian regional war. All Syrians in Lebanon should be registered at a camp positioned near the border for quick return. No freedom of movement within Lebanon. Lebanon cannot be expected to absorb this amount of economic and humanitarian pressure.

just send the Syrian refugees + Palestinian refugees to the gulf countries where they can cater for their needs (kahraba,housing , money , security ....)
btw in Lebanon 12 Palestinian camps in the whole gulf not even 1 camp
god bless democracy

Gebran Aoun bring the shit upon us with abundance and then tries to clean in with a little piece of paper.. FPM is a curse!

Then why aren't they flocking back ya Bashar !