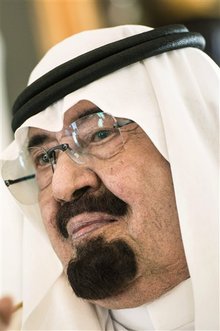 Saudi King Abdullah on Sunday sharply criticized religious extremists, vowing not to let "a handful of terrorists... terrify Muslims", in a speech marking the start of the Muslim holy fasting month of Ramadan.

Islam is "religion of unity, fraternity and mutual support" but some people "lured in by false calls... are confusing reform with terrorism", the monarch said, in comments carried by state news agency SPA.

"Their goal is to sow discord among Muslims," he said in an apparent reference to insurgents from the Islamic State of Iraq and the Levant (ISIL).

The powerful jihadist group has spearheaded an offensive by Sunni militants in Iraq since June 9, wresting control of northern cities and capturing vast swathes of territory.

ISIL operates in both Syria and Iraq and aims to establish an Islamic state straddling the border of those two countries, but their lightning advance in Iraq also poses a threat to Jordan and Saudi Arabia.

"We will not allow a handful of terrorists, using Islam for personal aims, to terrify Muslims or undermine our country and its inhabitants," Abdullah said.

"We are continuing, with God's help, to face and tackle this scourge," he said.

The Saudi monarch also wished Muslims "security, prosperity and stability" over Ramadan, which began in most countries on Sunday.

During Ramadan, which is sacred to Muslims because it is during that month that tradition says the Koran was revealed to the Prophet Mohammed, believers abstain from eating, drinking, smoking and having sex from dawn until sunset.

Khomaini from his side is doing official funerals for his brave shiite fighter martired during their jihadist duty...
Bravo karim, now as usual go have some chupachups man, chupachups...

Do u need links for official iran shiites militant dead during jihadist duty funerals in iran or u know but just chose not to see that..
Chupachups man..

As my respect goes around to every older person, you as well deserve my respect King Abdullah.
Having said that, my father once told me that if I misbehave, people would judge him (my dad) for bad bringing.
My dad went to say, "if your brothers commit any heinous act as well, I will be considered as a failure. And I should search to where I went wrong." My father kept repeating those lines when we were kids. However we turned ok in life with no trouble worth mentioning.
Now, king Abdullah, your sons committed every suicide-bombing targeting work-goers out there. Your sons inspired every violent person who sought nothing but killing for no cause and no legitimate reason what so ever.
Isn't time to start questioning the whole culture? A father can not just condemn his sons, every day when they blow themselves up, and move on!!!!
Continue below.....

..... continued from above,
The Americans are keeping you in this place to do just that. The Americans as well the Israelis love terror and dysfunctional culture.
My dear king, I think it is about time to man up!
I swear my intention is to save the Arabic identity. Please stop listening to the American and use common sense.
Own up to the problem. Take internal measures and God is with you.
God bless

Do u need links for official iran shiites militant dead during jihadist duty funerals in iran or u know but just chose not to see that..
Chupachups man..

Ramadan Karim, What is going on in your mind? It seems something Disturbing you due to an extreme event happened to you.

You seem to use the woe terrorist a lot, define Terrorist for us would you ?

7alesh those guys knows they supports the sameterrorists than isil execpt that they do scream ya ali.. They know that syrian regime let out more than 500 jihadist out of jail in the biggening of the uprising while jailing protestors, torturing and killing children (hamzah el khatib..)..
They know fsa is fighting isil while assad bombing fsa...
But they are the true terrorists in their mind, sitting behinds their pc looking to all this destruction and readdy to support iran/assad democratic/secular/modern..regime for the sake of their national heros (aoun, psp...)
They must be in real need for chupachups man, chupachups..

Lies, terrorism, and delusions are a Saudi national past time

Big johns can you share with your sources for the claims that "KSA teaches children at young age hate towards everyone is not Wahhabi" ?

Your unstructured argument reflects tremendous weaknesses in how you look at things . First you started by claiming that it's against anything not Wahhabi that shifted to mosques, as if mosques are for Wahhabis also. Anyway you come from a school of lies and hypocrisy.
I dare you or anyone else to find a definition for terrorism that wouldn't include hizballah or the collapsed Syrian regime.

Lies, terrorism, and delusions are a Saudi national pastime

Well, he pays for them, I suppose he has the right to slam them if he wants.

he should put his grand mufti in jail if he' opposes extremism on a genuine basis- everyone knows this isn't true.

He says: We will not allow a "handful" of terrorists, using Islam for personal aims, to terrify Muslims or undermine our country and its inhabitants," OK, "handful. So these are the ones that went rogue? "Personal" aims. They deviated from your plan, have their own agenda and no more serving your interests (I wonder what the
Turks are up to)? "Muslims". So it is OK to terrify non-Muslims? "Our" country. Now you're pissed off that what you've created has come too close to home? I can't say that your circle is fully responsible for the support and creation of extremist elements in you adopted religion, but I can say that there are "compelling" reasons that you do.

On the other hand, if you promote "unity", "trust" and "cooperation" which is supposed to have basis in your religion, it will most likely change the culture of Sunni vs. Shiite adolescent aggression and turn it to a society of peaceful and tolerant existence, which based on my observations and opinion is favored and practiced by most of the civilized and educated Sunnis, Shiites, Arab Christians, etc.