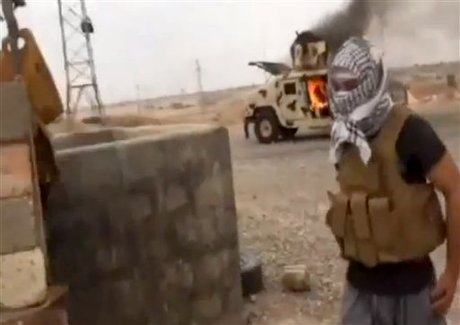 The jihadist Islamic State seized control of the key Syrian border town of al-Bukamal on Tuesday after a fierce three-day battle with rival fighters, a monitor said.

A spokesman for rebels fighting IS as well as President Bashar Assad's regime said the jihadists took the town after pouring in reinforcements from neighboring Iraq, where they have overrun chunks of territory in a swift offensive.

The takeover comes two days after IS declared a "caliphate" in territory they seized in both Syria and Iraq, and ordered the world's Muslims to obey its leader Abu Bakr al-Baghdadi.

"The Islamic State took total control of al-Bukamal in (the oil-rich province of) Deir Ezzor, after fierce fighting pitting it against rebels backed by al-Qaida affiliate Al-Nusra Front," said the Syrian Observatory for Human Rights.

Omar Abu Leyla, the rebel spokesman for Deir Ezzor province, told Agence France Presse "the battle was fierce... But IS has won this round."

He said the jihadists won "after deploying major reinforcements from Iraq into Syria on Monday night".

Fighting has raged for months in Deir Ezzor between the jihadists, formerly known as the Islamic State of Iraq and the Levant (ISIL), and rebels backed by Al-Nusra Front.

The rebels held their ground for most of that time but the jihadists were bolstered "mainly because of the heavy weapons" left behind by Iraqi troops during the lightening offensive, said Abu Leyla.

Hundreds of families fled al-Bukamal as IS took over, he said.

And regime warplanes carried out four air strikes on al-Bukamal after IS seized the town, added the Britain-based monitoring group.

The air force also struck Raqa, a bastion of IS in northern Syria.

The regime has rarely struck IS positions, instead targeting rebels seeking Assad's overthrow, until three weeks ago when the jihadists spearheaded the Sunni militant offensive in neighboring Iraq.

Also in Raqa, the jihadist group detained four men, two of them accused of not observing the Muslim fast, the Observatory added.

Near Damascus, IS fought the Army of Islam, a powerful rebel group that has been making advances, pushing the jihadists out of most of the town of Midaa, the Observatory said.

Syria's war began as a peaceful revolt demanding Assad's ouster, but exploded into a full-blown conflict when the regime unleashed a bloody crackdown on dissent.

Many months into the fighting, jihadists started streaming into Syria, and analysts have long warned of the conflict leading to a regional conflagration.