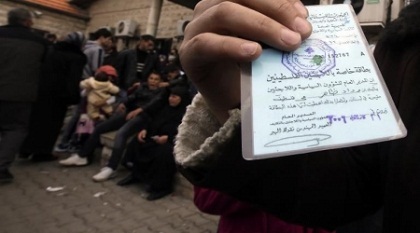 Lebanon is acting in a "blatantly discriminatory" manner by denying access to Palestinians fleeing the conflict in neighboring Syria, Amnesty International said in a report on Tuesday.

The watchdog said Lebanon has imposed increasingly onerous entry requirements at the border with Syria and that there was evidence it is trying to prevent Palestinian refugees from entering via Beirut airport.

"The Lebanese government's policies and practices towards Palestinian refugees from Syria have led to a range of serious human rights violations," said Amnesty.

"The policies -- which treat Palestinian refugees from Syria differently to other refugees -- are also blatantly discriminatory," it added.

Lebanon is hosting more than one million refugees from Syria, or about a quarter of its population.

Amnesty acknowledged that hosting the refugees put Lebanon under "immense strain" and criticized the international community for failing to provide more support.

But, it said, there was "no justification" for the different treatment of Palestinians from Syria, who also represent a small number of the total population that has fled the Syrian conflict.

The group said Palestinians seeking to cross the border from Syria were required to meet one of several criteria that were "extremely difficult and costly".

And the report documented instances in which Palestinians said they met the criteria laid out, including a residency permit and proof of relatives living legally in Lebanon, but were still denied entry.

In one instance, a woman who had returned to Syria to give birth, was denied the right to return to her family staying in Lebanon.

In another, the parents of a 12-year-old returned to Syria to renew their identity documents, leaving their son in Lebanon with his uncle, but were subsequently denied reentry.

And, the group said, a document leaked from Beirut's airport advises all airlines to avoid carrying any Palestinian passengers from Syria, regardless of the documents they have.

It threatens airlines with a fine and the cost of deporting passengers if they fail to comply.

"The policy set out in this document constitutes a clear breach of international law," Amnesty said.

Lebanon's government has denied there is any blanket decision preventing the entry of Palestinians from Syria.

Amnesty said it received no response from the government to its queries about the letter and incidences of denied entry.

There were approximately 500,000 Palestinians in Syria before the conflict, with refugee camps including Yarmuk in Damascus directly afflicted by the fighting.

Over 1million Syrian refugees, 400 thousand Palestinians, 60 thousand Iraqis.... All this in a country the size of the big Hawaiin island with 4 million people.

No offence amnesty international but get stuffed.

ado. At least it is bigger than Oahu...

Why not to Israel? That's where they come from in the first place? Amnesty Int. My Axx..

Ya Amnesty, unless you are willing to pay for them, build power plants, get us the water we need, food, filter out extremists and all of that, there is no place in Lebanon for Palestinians, Syrians, Iranians or anyone else.

Instead, use your influence to convince the west to invade Syria, remove Bashar from power, exterminate all terrorists there including Isil and Hezbollah and organise the human migration of syrians / palestinians back to Syria !

Otherwise, you will soon be facing the wrath of the people of Lebanon, united for once in an unprecedented ethnic cleansing campaign to purge this country of its excess misery !

Lebanon is a ticking time bomb and when it blows up, our past civil war will sound like the "good old days" when everything was peaceful !

Enough Palestinians, Syrians, Iraqis, or whatever entering Leb wz all due respect.. guest go home now...amnesty go home too. don't teach us what to do.

amnesty , don't teach us what to do, pls go play somewhere else.

yes l_f, we were so happy before when the takfiris were peacefully ruling syria under democratic virtue... then assad came with his "dirty war" trying to take power at any cost.

However you dont agree with me that they should take with them the Hezbollah militia. You dont agree that Brital should be cleaned. Because you are a DOUBLE STANDARD person.

I am against ALL milicias for Lebanon. I am Lebanon first. You are with the Hezbollah milicia before lebanon. And this is why you are double standard.

When we had our civil war, when israel bombarded us, noone moved a finger in syria. Neither assad, nor sunni syrians, nor christian syrians.
They didnt give a damn.

I dont understand why we should get involved in their war. Neither send milk and blankets, nor send the Hezbollah milicia. Instead we should have built our country and our economy.

sure NGO present to denounce the crimes of your master is not very convenient for your propaganda....