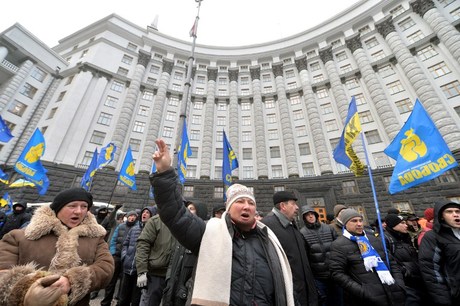 Resurgent government forces on Saturday hoisted the Ukrainian flag over pro-Russian rebels' main stronghold after a devastating shelling assault that leveled much of the city but delivered Kiev its biggest success of the campaign.

The self-proclaimed mayor of Slavyansk confirmed to Agence France Presse that insurgents had abandoned the rustbelt city of 120,000. A local resident said by phone that barricades once manned by the camouflage-clad gunmen stood abandoned since the early morning.

Ukraine's ability to win back Slavyansk -- home to one of the country's biggest weapons storage facilities that fell to the insurgents on April 6 -- marks a key turning point in three months of low-scale warfare that has threatened the very survival of the ex-Soviet state.

Ukraine's Interior Minister Arsen Avakov said in a Facebook post that the withdrawal was led by senior militia commander Igor Strelkov -- alleged by Kiev to be a colonel in Russia's GRU military intelligence unit.

Both Strelkov and Moscow deny any GRU link despite Western claims that the Kremlin is covertly funding and arming the uprising to destabilize Kiev's new pro-European leaders and retain control over Russian-speaking eastern regions of Ukraine.

Ukrainian Defense Minister Valeriy Geletey told President Petro Poroshenko that his forces had raised the national flag over city hall "in accordance with your order to liberate Slavyansk."

Poroshenko stormed to victory in a May 25 election thanks to his vow to quickly resolve the country's worst crisis since independence in 1991.

Most analysts think that the 48-year-old chocolate baron desperately needed an early success in the campaign to secure the trust of Ukrainians frustrated by their underfunded army's inability to stand up to what they see as Russian aggression.

"The departure of the fighters was a surprise. Nobody was aware it was happening," city resident Kolya Cherep told AFP by telephone.

Strelkov himself had told the pro-Kremlin LifeNews channel on Friday that his units "will be destroyed... within a week, two weeks at the latest" unless Russia helped secure an immediate truce or moved in its troops.

Slavyansk is the symbolic heart of an uprising sparked by the February ouster of a pro-Kremlin administration in Kiev and fueled by Russia's subsequent seizure of Crimea.

Relentless artillery and sniper fire across eastern Ukraine have since killed more than 470 people and left Western leaders frustrated by repeated mediation failures.

Poroshenko on Friday agreed to immediate crisis talks with rebel commanders and Russia aimed at stemming bloodshed that has also inflamed East-West ties.

Clashes in the economically-vital border regions of Lugansk and Donetsk have picked up with renewed vigor since Poroshenko tore up a 10-day ceasefire agreement earlier this week.

His decision was immediately followed by the launch of a "massive" offensive by Kiev that led President Vladimir Putin to warn that Russia had the right to protect its compatriots in Ukraine.

But Poroshenko's call for talks on Saturday have yet to be confirmed by either Moscow or mediators from the Organisation for Security and Cooperation in Europe (OSCE) -- a Vienna-based body first formed to preserve peace on the continent during the Cold War.

Kiev has balked at the idea of holding round-table discussions in Donetsk -- a location preferred by Moscow who carries widespread influence there. But the insurgents refuse to travel to Kiev or EU member countries for fear of their immediate arrest.

The 43-year-old Strelkov remains one of the uprising's most mysterious but also powerful figures who effectively headed the new Kiev leadership's most-wanted list.

He holds the title of "defence minister" of the Donetsk People's Republic and is also the chief of the Slavyansk militia.

Strelkov was linked to the April capture and detention of seven OSCE monitors in Slavyansk who were eventually released after an eight-day ordeal following intervention from Moscow.

Kiev has published what it says are intercepted conversations between him and Putin's special envoy Vladimir Lukin talking about the OSCE monitors.

"We want to liberate Ukraine from the fascists," Strelkov told a Russian tabloid after his units had captured Slavyansk.