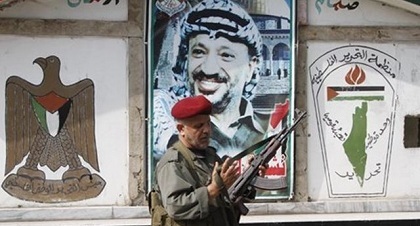 Palestinian factions in Lebanon agreed on Saturday to start the deployment of Palestinian security forces in the southern Ain el-Hilweh refugee camp as of Tuesday afternoon.

The decision was announced after an expanded meeting held at the headquarters of the Palestinian National Security Forces in the camp, with the participation of representatives of all Islamic and Palestinian factions in Lebanon.

The leaders said they have decided to “deploy joint a Palestinian security forces comprising 150 troops in different areas in the camp,” and set Tuesday, July 8, a date for starting the deployment.

"The forces will have presence in four fixed positions which are the vegetable market area, al-Barksat (in the northern part of the camp), al-Safsaf-al-Shohadaa mosque region and the Bustan al-Yahoud area,” they detailed.

"Today we are sending a message of security, peace and stability from the (Ain el-Hilweh) camp to protect Palestinians' presence in Lebanon based on the recent initiative announced by the national and Islamic factions,” Fathi Abu al-Ardat, the representative of both Fatah and the Palestine Liberation Organization in Lebanon, said after the meeting.

The Palestinian leader stressed that the “bitter experience” in the northern Nahr al-Bared camp and other camps around Lebanon “will not be repeated.”

"We insist on a unified Palestinian stance because we are one people, despite the presence of different factions. Our goal is one and it revolves around how to protect the Palestinian presence in collaboration with the Lebanese state.

"The security of the camp is part of this country's security.”

He noted that the plan also aims at strengthening Lebanese-Palestinian relations.

Abu al-Ardat continued: “We want security and stability for our people through this deployment. We want them to enjoy a decent life, and this is their right. The plan comes as a response to people's wishes”

"The forces will include all factions and national and Islamic forces, and will be a result ofjoint cooperation to protect the security of the camp,” he said.

"Ain el-Hilweh is our home until we return to Palestine.”

Located near the southern city of Sidon, Ain el-Hilweh is the largest Palestinian camp in the country and is home to about 50,000 refugees.

It is known to harbor extremists and fugitives.

Tension frequently surges in the camp as a result of armed disputes between the different Palestinian factions.

On May 14, clashes erupted in the camp between armed groups after news of the death of Fatah al-Islam official Alaeddine Ali Hujair broke out. At least four people were injured in the fighting.

Also in May, Fatah Movement official Colonel Talal al-Ordoni survived an attempt against his life in Ain el-Hilweh.

And in April, a tensed atmosphere reigned over Ain el-Hilweh after unknown assailants shot dead the bodyguard of Jund al-Sham official Oussama al-Shahabi.

I agree partially with you wolf on what you you say about weapons. Who needs weapons? I think when the government of Lebanon become enshalla strong enough to protect it's citizens and the refugees, then NO ONE going to need weapons. that doesn't mean not to manage and control all weapons on the Lebanese soil! (if Iran, Syria, HA, KSA, etc OKEY IT
the second part I do not agree with you about, that your next door neighbours (the Palestinians) who has no choice to become refugees at Lebanon,I do not think it's fair that after 65 years of they're living in Lebanon and contributing to the country to keep calling them foreigners, refugees or trouble makers. I think it's time for you mr wolf and people who are sharing your mentality to become humans. enough is enough !!!

I agree with you mr wolf on No weapons should be allowed to anyone, but the lebanese army. All citizens of lebanon including the palestinian (refugees) must feel safe and secure when the lebanese army can take this responsibility. I don't think it was the palestinians fault or choice to become refugees without basic human rights, dignity, safety, security,future, hope etc.. I think it's time for people in power to be fair to review the palestinians camps and rights.
I think it is a shame for us to keep calling them refugees, foreigners, or trouble makers after over 65 years of contribution ! 3, 4, or 5th generations
enough is enough

right on ya Wolf
You are 100% right. Our LAF should have full control of these camps This is Lebanese territory pure simple

Total disarmament of all factions and total control of these place by the LAF. No other option, or else many problems...

Unfortunately errors of the past are made again and we don't learn from History. There should not be any sanctuary like these camps where criminals of all kind can hide.

As you said, in no other place in the world this would be tolerated. Even Palestinian camps in Gaza and the West Bank abide by the Palestinian law.

It';s time to do somewthing about this ridiculous situation. Send in the LAF and if necessary bulldozers to level the area. Every one who shoots at a Lebanese Army soldier deserves only one thing.....a bullet between his eyes or in the back of his head.