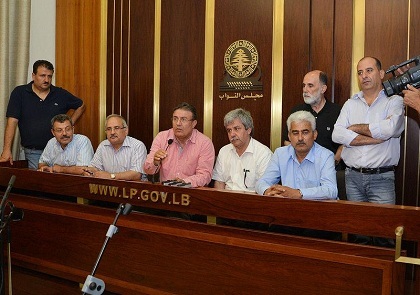 The Syndicate Coordination Committee vowed on Saturday to continue boycotting the correction of the official exams until the adoption of the contentious new wage scale.

"We will continue boycotting the correction of exams until the new wage scale gets adopted and all sectors secure their employment rights without any exception,” the SCC said after a meeting.

It also announced a general strike on Wednesday in all ministries, public administrations and institutions, municipalities and at the Grand Serail in all the nation's governorates and districts.

And a 24-hour sit-in will also take place on Wednesday near the Ministry of Education and Higher Education in Beirut, with the participation of representatives of parents and students' councils, the SCC added.

"This sit-in will be the first of similar protests to be held at all other ministries,” it noted.

The SCC, a coalition of private and public school teachers and public sector employees, explained that not adopting the new wage scale or other pending drafts with a social character “serve the policy of causing tension in the country and of supporting extremism and sectarian divisions... and aim at harming the Committee and its struggle for Lebanese people's” rights.

It continued: “Officials' neglect of thousands of Lebanese people's rights point out their decision to eliminate what is left of the welfare state...and of eliminating public employment.”

The SCC assured that it is holding talks with parents and students' councils and stressed its rejection of putting them in confrontation with teachers.

More than a dozen of public sectors employees held a sit-in near the Value Added Tax building in Beirut on Tuesday, reiterating their demand for the approval of the controversial wage hike.

Several SCC activists spoke at the protest, urging the parliament to agree on the salary raise.