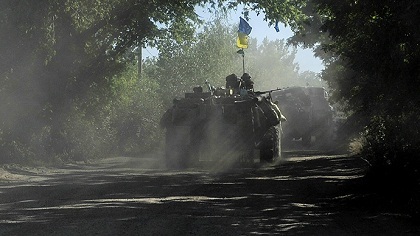 Resurgent Ukrainian forces on Sunday pursued retreating pro-Russian rebels after seizing their symbolic bastion in a morale-boosting win that appeared to dim hopes for a ceasefire in the bloody separatist insurgency.

Western-backed President Petro Poroshenko called the moment when his troops hoisted the Ukrainian flag over the militias' seat of power in Slavyansk "a turning point" in a campaign that has killed nearly 500 people and inflamed East-West ties.

The rebels admitted suffering heavy losses while abandoning the strategic city nearly three months to the day after its capture marked the onset of a new and even more bloody chapter in Ukraine's worst crisis since independence in 1991.

Most analysts think Poroshenko desperately needed a battlefield success one month into his presidency to secure the trust of Ukrainians frustrated by their underfunded army's inability to stand up to what they see as Russian aggression.

But Poroshenko cautioned that insurgents were regrouping around the million-strong eastern industrial hub of Donetsk and vowed to flush out "terrorists who are entrenching themselves in large cities".

"Yes, we are losing a lot, but I am sure that our defense of Donetsk will mark a turning point," Donetsk rebel leader Denis Pushilin confirmed in a tweet. "We will win."

But Pushilin and his allies only managed to bring out 2,000 supporters on Sunday for what was meant to be a massive rally in central Donetsk designed to display the intensity of the Russian-speaking region's independence drive.

And many in Slavyansk seemed relieved to see the gunmen finally leave their shelled-out city's streets.

"We felt like hostages," a retired teacher named Anna Gribnikova said a few steps away from a line of several hundred patiently waiting for their two loaves of bread being hand out per person by Ukrainian relief staff.

"Those guys are still dreaming of the Soviet Union," Gribnikova lamented. "They do not seem to understand that this is the 21st century."

The surge of optimism in Kiev has only added to already strong pressure on Poroshenko not to agree to bow to pressure from his Western allies and sign another truce with the insurgents.

Saturday's triumph in Slavyansk "justifies the position of those who favor a stepped-up military campaign over endless negotiations that turn this into a frozen conflict," said Volodymyr Gorbach of the Institute of Euro-Atlantic Cooperation.

Poroshenko tore up a 10-day ceasefire last Monday because of unceasing rebel attacks that killed more than 20 soldiers and -- according to both Washington and Kiev -- allowed the separatists to stock up on new supplies of heavy Russian arms.

Uneasy EU leaders are hoping that a new truce and a Kremlin promise not to meddle can take pressure off the bloc to adopt sweeping sanctions that could damage their own strong energy and financial ties with Russia.

Poroshenko hesitantly invited the separatists and a Russian envoy to attend European-brokered discussions about a new ceasefire on Saturday.

The call had gone unanswered by Moscow and the rebel command. But Russia appeared ready to talk again after the fall of Slavyansk.

Russian Foreign Minister Sergey Lavrov stressed to his French and German counterparts the importance of "reaching an agreement between Kiev and the southeast of Ukraine on an unconditional and lasting ceasefire."

Lavrov specifically cited the "rapid escalation of the situation that comes amid an intensified military operation by the Ukrainian authorities."

The withdrawal from Slavyansk was led by senior militia commander Igor Strelkov -- alleged by Kiev to be a colonel in Russia's GRU military intelligence.

Kiev believes this supports Western claims that Moscow is covertly backing the uprising to both punish the new leaders for the February ouster of a Kremlin-backed administration and keep control over Ukrainian regions with important military production plants.

Strelkov on Saturday lashed out at Vladimir Putin on Twitter for seemingly going back on his promise to use "all available means" to protect his compatriots in Ukraine -- a neighbor the Kremlin chief referred to as "New Russia."

But the 43-year-old militia commander later told Moscow television that he was busy plotting a counter-offensive that he himself would lead.

"I intend to issue an order (on Monday) creating a central military council that will include all the major field commanders," Strelkov told the LifeNews channel.