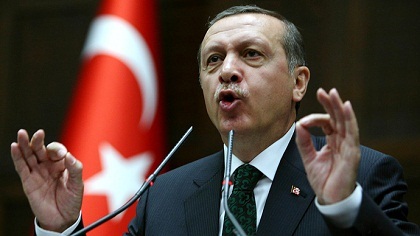 Turkish Prime Minister Recep Tayyip Erdogan on Tuesday vowed to take the fight against an ally-turned-foe Muslim cleric to a new level if he is elected president in August 10 elections.

"If elected president, I will take the fight against the parallel structure to the next level," Erdogan told lawmakers of his ruling Justice and Development Party (AKP) in parliament.

Erdogan has long accused followers of Pennsylvania-based cleric Fethullah Gulen of establishing a "parallel structure within the state" by using its sway in Turkey's police and the judiciary and of concocting a vast corruption scandal in December to unseat his government.

His comments came after local media reported Monday that Turkish police have ordered a major new investigation into the Gulen movement.

In a written order sent to the police departments in 30 provinces, the movement is accused of working to overthrow Erdogan's Islamic-rooted government and seize control of the state by forcibly abolishing the constitutional order.

Erdogan appears to be stepping up the fight against Gulen as he heads into the presidential elections which he is widely expected to win in the first round.

The Turkish premier also voiced concern that some within his own party failed to demonstrate the courage to fight against what he called "treacherous network".

"We see some pockets of resistance in the fight against the parallel structure that threatens our national security ... Unfortunately, there are also those among us who fail to show the necessary reaction," said Erdogan.

"We see some municipalities and ministries do not tackle this issue courageously."

"Those who tolerate this treacherous network must know that both we and our nation have taken note of this."