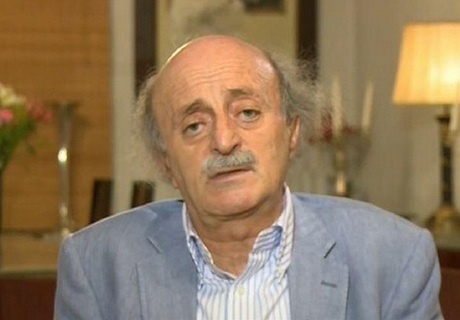 Progressive Socialist Party leader MP Walid Jumblat stressed on Wednesday that Lebanon cannot have a confrontational presidential nominee, urging an agreement on a consensual candidate to end the deadlock in the country's top post.

"I don't see an end to the (presidential) crisis because both nominees are confrontational. They have to understand that neither of them can be a confrontational candidate,” Jumblat said in an interview on Al-Jazeera television on Wednesday evening.

He elaborated: “We have to build on the Baabda Declaration of (former) President Michel Suleiman...I proposed the nomination of (Democratic Gathering MP) Henri Helou but they said 'who is Walid Jumblat to come forward with a Christian candidate,' although the president must be a nominee of all the Lebanese.”

"Until this moment I am faced with rejection,” he noted.

Jumblat said the presidential impasse is a local crisis, but remarked that some factions banked on regional developments.

"Some have banked on foreign factors and Hizbullah, for example, thought that things will end quickly in Syria but has reached a dead-end. Others banked on the (Syrian) regime's fall and this did not happen as (Syrian President) Bashar (Assad) has destroyed Syria,” he explained.

In a related matter, Jumblat called on Hizbullah and others to “withdraw from the Syrian swamp” and urged strengthening the Lebanese Armed Forces.

Also on the Syrian crisis, Jumblat said the neighboring country's regime possesses the capacity to create chaos in Lebanon, like carrying out assassinations or planting bomb-laden cars.

"But the main factor is Iran and I do not understand the support for Assad or for (Iraqi Prime Minister Nuri) al-Maliki. (Iran) supported two hated figures. This policy has led to the fragmentation of Syria and of Iraq.”

The Druze leader said Assad is playing a “malicious game... just like (the extremist jihadist groups of) Al-Nusra Front and the Islamic State of Iraq and the Levant.”

He also pointed out that U.S. President Barack Obama and all “Syria's friends” have let the country down by not providing anti-rocket missiles to the Syrian opposition.

Although I am not a follower of any lebanese politician by conviction, I find Jumblatt to be the one making sense out of it all.
of course you might curse him all you want just because he align his positions in the best interest of Lebanon. It is how I see it.

If the Christians don't want Helou just because he was proposed by Jumblatt, then look for a consensus President that is different then Aoun and ja3ja3 but helou similar to helou(even though I like ja3ja3 too)

Jumblat you are now etched into lebanon's history as the spineless turncoat you are. Stop stating the obvious start providing solutions that start moving us closer to a president. We are tired of your consensual this provocative that stance! Get off the fence and make a contribution. There is nothing wrong with a provocative president especially one that threats to uncover your corruptions. And there is no such thing as a consensual president who will be strong for the country. Go ask Suleiman he was consensual until he became strong and sure enough the opinions he differed from tried to discredit him. Who told you we want a consensual president to sit on your fence and be a passenger?

Take my you know what and shove it down your throat and shut the hell up you low life scum bag piece of filth. el3ama bi albak ma awsakhak

look at this obsolete and ridiculous personnage.. in third world countries this is the rotten specimen u get!

when u make allaince with your father's killers for 40yrs till now means cowardice is a small word for this traitor... when u r a traitor to your father does it mean u will be any good for other people?