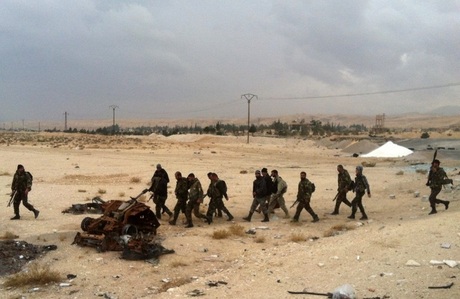 Clashes between Syrian rebels and Hizbullah on the Lebanese border have killed at least four fighters, a security official said Sunday.

The fighting erupted on Saturday in an undemarcated area of the frontier between Qalamun in Syria and Arsal in Lebanon’s Bekaa region, the Lebanese official told Agence France Presse, speaking on condition of anonymity.

"A Hizbullah fighter was killed and 12 were wounded on Saturday night," he said. "The fighting intensified on Sunday evening with three Syrian fighters killed and 10 wounded."

Meanwhile, Lebanon’s National News Agency said the bodies of three Syrians killed in the clashes and 10 wounded fighters were transferred to a field hospital in Arsal.

The long and porous border is often used by smugglers, refugees and fighters.

Syrian Observatory for Human Rights head Rami Abdel Rahman said: "It appears Hizbullah launched the attack in a bid to finish off the pockets of rebel resistance."

Arsal and the area around it are largely sympathetic with the Sunni-led uprising against Syrian President Bashar Assad.

In April, Syrian forces backed by allied fighters from Hizbullah retook control of most of the Qalamun region.

But Syrian activists say hundreds of opposition fighters have taken refuge in the caves and hills in the border area, using it as a rear base from which to launch attacks inside Syria.

Last month, Lebanese Army forces carried out raids in the area targeting militants with ties to "terrorist groups", an army statement said at the time.

Supporting the criminal Assad regime is part of Hizbollah mission to support the Palestinians in Gaza. What a shame! Our hearts are with the people of Gaza and Syria against all the forces of darkness - from Iran to Tel Aviv.

The new wing is filling up pretty quickly. I was expecting them for a few days now.

How sad... how depressing.... how traumatizing..... these heroes were riddled with bullets or even slaughtered while they were defending us from terrorism. Sorry, I have very strong feelings about this...

From my outsider stand point Assad protects all minorities. And Hezbollah is just repaying Syria for its support of the organization from years past.

@parra-reel: If people don't know you the way I do, they might think you are sectarian. I care about you...

parra, which umma is it that nassrallah always talks about defending? Is it the shia or sunni umma? I have always maintained it is the shia umma.

ohhh yes...go and stay there. Lebanon is NOT part of any Oumma...15 years of civil wanr and you do not get it yet ?

It is Syrian freedom fighters versus invading sectarian terrorists more like it.

funny yeah, they go to their country Syria and kill them and then have the audacity to call them terrorists on their own soil.

Not a chance terrorist

Hizbcaptagon thug got captured near Homs.

they dont have religion, they are not shias, just khomeynist drugdealers...

haboub since u support khamenei's minions, what are u waiting to go to qalamoun ? I'll pay my cousin to drive to the border by taxi/service...

no isis in qalamoun, jn+fsa only...

listen to cedre, he is the expert on crazy "sunni" groups.

compared to ignorant like u fd, i'm indeed an expert in lots of subjects...

To administrator and to your bias newspaper,

you are just fooling yourselves.

Just the usual PanzerGen. Its one user posting under 2385423742 accts, moderating everyone and liking his own posts, and downvoting any post that isnt a zombie Wahhabi Zionist. Welcome to Naharnet! Freedom !!! YEAAA

No they are not, they are just typical lebanese

to get rid of HA cedre, surely you know that.

Ultrahabib,
I don't remember Syria firing anything on Israel, they always wait " for the right time and the right place for a painful retaliation, " which has not come yet.
The last time that they fired on Israeils was during 1983-84 war on top of Bekkaa on Israeli fighter planes. Thank you.