Germany Vows to Resume Support to Lebanon over Refugees Crisis 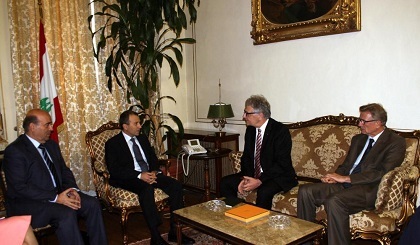 “Germany wants to sense the real situation in Lebanon in the presence of more than one million Syrian refugees,” Strasser told reporters after talks with Foreign Minister Jebran Bassil at the Bustros Palace.

He pointed out that the two officials discussed new forms of solidarity offered by the international community in an attempt to share the refugees burden with Lebanon.

“It was an open discussion in which the Lebanese side briefed us on valuable information that should be conveyed to the German government and the European Union.”

In May, German FM Frank-Walter Steinmeier made a two-day visit that included talks with Lebanese officials on the Syrian refugee crisis.

Strasser hailed the efforts exerted by the Lebanese authority to aid the Syrian people during the past two years.

“Germany granted Lebanon during this period around 130 million euros and will resume its support,” Strasser said.

He revealed that his country will also host several conferences on the matter.

Asked about a possible Lebanese decision to establish camps for Syrian refugees outside Lebanese territories or in buffer zones along the border with Syria, the German official said that he didn't discuss the proposal with Bassil.

“I've heard about such a suggestion, which will be the center point of upcoming meetings during the next few months.”