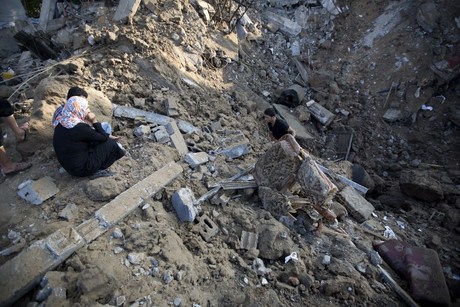 Local Lebanese television networks decided on Thursday to air a unified newscast in solidarity with the ongoing Israeli assault on the Gaza Strip, a step that was endorsed by Information Minister Ramzi Jreij.

The initiative was launched by As Safir newspaper's Editor in Chief Talal Salman in coordination with prominent Lebanese and Palestinian figures, and it is scheduled to take place on Monday.

"I was informed about the initiative, and I asked (the state-run) Tele Liban to participate in this step that aims at showing solidarity with the Palestinian people against the inhumane crime committed by the Israeli army,” Jreij said in a statement.

He deplored the killing of children, women and elderly in Palestine, calling on the international community to interfere and "stop the crime."

Meanwhile, Talal Maqdessi, the general director and the chief of the board of directors at TL announced that the “national TV station is ready to take part in the unified newscast alongside fellow Lebanese channels.”

Maqdessi stressed TL's “solidarity with the Palestinian people who have suffered greatly the crimes against them in the occupied Palestinian territories.”

"TL has followed up on the Palestinian cause since the 1950s, and is now performing its duties towards the Arab world in highlighting the humanitarian rights of the Palestinian people,” he explained.

"Together with our fellow TV stations, we will take a unified step to underscore the crimes committed against Palestinian citizens and children,” Maqdessi said, praising Salman's initiative.

In a telephone call with Salman, As Safir's Editor in Chief revealed to Naharnet that local TV stations' executives will convene on Saturday to decide on the final format of the unified newscast.

"The introduction and the timing of the newscast will of course be the same (on all TV stations),” he told Naharnet, without detailing on whether the entire newscast will be identical on all channels.

What matters is agreeing together on the same cause, Salman pointed out.

"If they (TV networks) don't agree on Gaza, then on what can they have a unified stance?” he asked.

"We hope TV channels would agree on local matters,” he said.

For the tenth day in a row, Israel has continued bombarding Gaza on Thursday as the death toll of the military operation has exceeded 230 while more than 1550 others were wounded.

I also hope they air solidarity programs too, with the thousands and thousands, not hundreds of children , shot in the knees, castrated, ' Sarinated ' by the butcher Ass-ad !

What is the criteria for initiating such a unified newscast? Do the Syrians being killed by their own government &/or by the various factions fighting for change not qualify?
What about the Iraqi's massacred by ISIS? They are not worthy of a unified newscast?